http://www.killiney-kopitiam.com/
This is a Singaporean Cafe chain started in 1919 as one shop in Killiney Road and is now a chain in Singapore, Malaysia, Indonesia, Hong Kong and Australia.  So, they must be doing something right internationally, yet they have a rather low score on Urbanspoon. Although it is usually busy during lunch time and early evening, the food is a bit lacklustre and average at best here, which might explain the rating. It is also listed as a Halal restaurant.

The Place
Set near the ill-fated Paramount shopping centre which has very low occupancy rates and has never really picked up, this is still a relatively good location near the top half of Bourke Street. There is not a lot of parking here being where it is. The space is light and airy and it has the feel of a basic eating hall, with furniture that's similar to a real kopitiam (cafe) back in Singapore.

Things to do Nearby: Top bits of Bourke Street and 5 minutes from Chinatown and Collins Street either side of Exhibition Street.

The Food
When I first saw that Killiney had launched in Melbourne, I was really excited because there are not that many Singaporean offerings in Melbourne, compared to Malaysian (with the demise of Singapore Chom Chom which was truly Singaporean). I have been to Killiney Kopitiam in Bourke Street a number of times. I have to say that the food is not bad but it is average at best and most of the dishes would lose out to competitors in various places around town.

Hainanese Chicken Rice - with Jalan Alor close by, and Coconut House not too far away, this place ranks a distant third on Chicken Rice to both the Malaysian places. This is disappointing because I genuinely believe that on average, the Singaporeans do better Chicken Rice than Malaysians - yet, here, that's not bearing out. The rice itself is ok, light and fluffy but chicken is generally overcooked and chewy, which is not how it should be.

Fried Hokkien Noodles - This is one of my favourite Singaporean dishes but it's a bit tasteless and dry here at Killiney Kopitian Bourke Street. 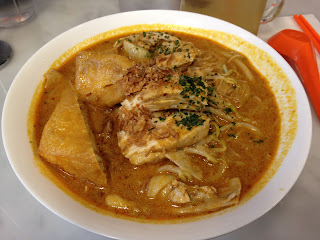 Laksa - The laksa here is rich in coconut milk but lacks spice and tastiness overall. It's not the same as the Killiney offering in Singapore itself, and lacks the layers of flavouring.

The Service
Ordering at the counter and having the dishes brought to you is very much a kopitiam style of delivery. That's what you'd expect at a kopitiam in Singapore. It might not be what people are used to. I don't mind the concept as the staff are friendly and smiles all round make you feel welcomed. The first time I was there, I didn't realise this and they had to explain the system (that I had to go up to the counter to order and pay first).

Overall
Although this doesn't sound like a positive review, it's not exactly a bad one. I'd still go there when I am missing the specific Singaporean dishes that they offer here, because I can't really get it anywhere else in the CBD. Old Raffles Place still has better Singaporean food if you are willing to go slightly out of the city, and can put up with the bad service.

Cultural Moment
Fried Hokkien Noodles mean different things to West Malaysians Malaysians, East Malaysians and Singaporeans. In West Malaysia, it is primarily fried in a dark savoury soy sauce with fish cakes, pork lard, (sometimes, cabbage), and bean shoots. In East Malaysia, it is in a sweet dark soy sauce with just basic bean shoots and eggs. In Singapore, it's fried in a light soy sauce, with prawns, calamari, eggs, pork belly bits, bean shoots and spring onions (and is usually combined with vermicelli). Hence it's important to differentiate them from each other as they are all quite different.

The Hokkien noodle is used also in Laksas (in combination with vermicelli), in a Hokkien  Prawn Noodle Soup dish (that has a very strong prawn based soup), and in Mee Goreng. It's a versatile noodle that packs a punch because it is a lot more substantial than your average egg noodles, the kway teows, and vermicellis.

Hokkiens originally came from the Fujian province in China.Hokkien is the dialect I speak and the dialect of my Mum. It is also the dominent spoken dialect in Taiwan, thought their Hokkien is a lot more 'chim' which means 'deep' referring to the sophistication and complexity of their version of the dialect. The ones used in Singapore and Malaysia are slight changed by the inclusion of local Malay, Tamil and English words.
Posted by Shanton at 17:23