Just how wondrous is Wonderbao? It's not bad as things go because it's clear they make it fresh and the buns are light. I am glad it's taking off and doing well because it's a great thing to introduce to Melbourne more widely. While the humble bao has been available in Melbourne through all the yumcha places and some of the food court stalls, it's never been the highlight nor widely recognised as a key part of Chinese cuisine. This might help change all of that, and it's happiness for me as a brekkie source. 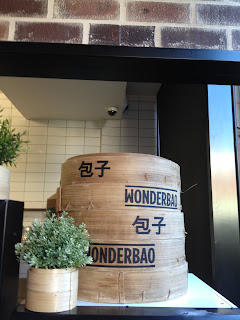 If you don't have a good sense of direction, this might not be easy to find. There are two ways to get there - go via A'Beckett Street and go through a non-descript building entrance and it's at the back of building (19-37). Alternatively, you could go down Little La Trobe Street - and then turn in to Literature Lane, walk past the bins to get there. This is not really a place to eat in - it's more a takeaway place.

Things to do nearby: This is near Melbourne Central and RMIT University, and State Library is just 4 minutes away. Queen Vic market is also just about 8 minutes away.

The Food
Bao is notoriously difficult to get right. The quality of the light dough is a tricky thing to achieve - too light or too heavy and it doesn't work. The worst type of bao will stick to your soft palate and turn really starchy, sticky, and unpleasant.

The balance between too much dough or too little dough in relation to the filling is also important. Many places in Asia suffer from bad reputation of all dough and stinginess on filling, so, they don't last long. Others go the other way and the dough is almost only as thick as the skin and can barely hold the filling together. That's kind of like having a whole bowl of spaghetti bolognese with barely any spaghetti but lots of sauce - doesn't work either.

Then there's the filling. It's not a simple matter of just any filling will do, there's also a need to balance the sauciness with the meat (for the savoury ones) and smoothness (for the sweeter dessert type fillings). So, what's the verdict on some of the baos at Wonderbao.
﻿
﻿Overall, it's not bad but just on the side of needing a bit more generosity in quantity of filling. You can tell that the fillings here are healthy and they have tried to minimise fatty meats in their savoury baos (other than the pork belly ones - you can't avoid the fat in that one). With their Chicken and Pork Da Baos, because the meat is less fatty, it could get a bit dry, so it might need just a tad more sauce where possible.

Their gua baos are generous and taste great but be warned, there's no elegant way to eat these. Watch out if you're wearing white and are a novice at eating this.

One last thing... they provide Sriracha Sauce if you want to spice up your baos. Their Sriracha Sauce is made in the USA, rather than the Thai ones. Therefore, it's acutally less tangy and more chilli. I talk about Sriracha Sauce in a blog entry on Middle Fish.

The Service
Friendly :) and efficient. Also, very willing to explain the menu. Just what you need for a takeaway joint.

Whether you are here to eat or somewhere else, the fresh baos should be eaten fresh - don't takeaway and microwave it later as it can break down the dough consistency. It's best steamed fresh. I'd go there for brekkie anytime. Good thing they only serve the gua bao after 11am.

Cultural Moment
Baozi (bao for short) has been part of Chnese Cuisine for a very very long time - some trace it back to some 2000 years ago. There's Da Bao (Big Bao), Xiao Bao (Small Bao), Gua Bao (Sliced Bao - as in slicing the dough and using it to wrap the fillings), and Man Tou (Bun without the Fillings). Sometimes, fresh bao could be served fried too. In addition, some would consider Xiao Long Bao as part of the family. It is a humble and common dish is Asia to the point that it is taken for granted. Howeverm it's such a huge part of Chinese culture that it deatures even in Chinese folklore and is mentioned in historical events.

The humble Bao is to Chinese Culture what Bread is to the Europeans. It features in stories about Zhuge Liang during the Three Kingdoms Period of China to urban legends of Sweeney Todd like Innkeepers who serve up their victims in famous bao recipes (unbeknownst of course to diners). So, enjoy you Baos. You are partaking in a piece of Chinese history.
Posted by Shanton at 23:39