Desi Dhaba doesn't rate very highly on Urbanspoon and having only been there once, this is based on one visit. I think I would go again at some point as the first visit has been relatively pleasant and I like the quirky deco of the place. This place is connected to the Tandoori Times chain of Indian restaurants. The clientale here is a healthy mixture of both Indian and non-Indian groups of diners. This place is supposed to be Halal certified too - though it does serve alcohol at the bar. 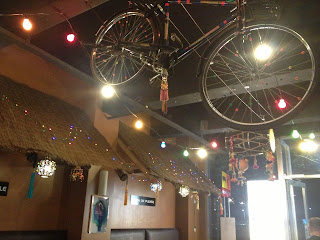 Set near the corner of Russell and Flinders Streets, this place is diagonal to Federation Square and so, parking will have to be paid mostly. It's a place that I think balances between quirky and tacky - I will let the pictures here speak for themselves. I suspect it can get noisy in here though when I visited with Paul and Robbie - it was relatively quiet (other than the loud Bollywood music which I love). There's a lot of space here and they don't try to cram diners in, which is great.

Things to do nearby: Federation Square, Russell Street, Little Collins and Collins Streets are all within 5 minutes walk. 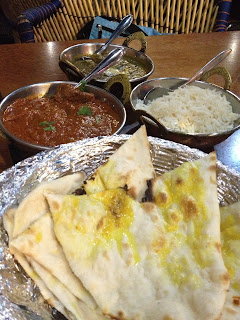 This place serves a wide range of Indian cuisine (both north and south) but I think has clearly north Indian sensibilities. It claims to have authentic dishes but they are not as spicy, rich or hot as the dishes in India. However, the food is relatively tasty and well presented. The naan bread was average and 2 ofthe 3 dishes we had were yummy.

Paneer Saag - a common dish in many restaurants, it's pretty good here too and not overly salty as some places are wont to do.

Chicken Tikka - was not as tasty as some other places and not as well charcoaled or tangy as I would have liked it. I have had much better Chicken Tikka than this.

Goan Lamb Vindaloo - had a good kick and the goat was tender, it was yummy and you definitely rice to go with this one.

The service was nonchalant. We were not greeted, walking in and though I don't want to be precious about it, it would have been nice to have been acknowledged when walking into a restaurant. Once we got settled in though, the food came pretty quickly even when there was a crowd. Although not very personable, it was not rude either.

Overall
I'd give it another go to try a few other dishes given the extensive menu. However, I would hope that the service would be better the next time. 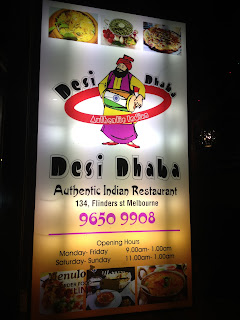 A dhaba is usually a road side eatery. It could range from a tin shed to a dedicated purpose built building that is like a truck stop. It reminds me of some of the 'truck stop' eateries in Australia, that's attached to petrol stations in country roads. You could quite easily google image 'dhaba' to get a sense of the range of dhabas in India.

I believe that Dhabas in India tend to focus on Punjabi cuisine - the Punjab region covers parts of North India and Pakistan.

Famous Punjabi dishes in Australia include Tandoori Chicken and Chicken Tikka, Rogan Josh, Saag Gosht and Paneer,and Biryanis. All very yummy but does not have the chilli crazy hotness of their southern cousins. 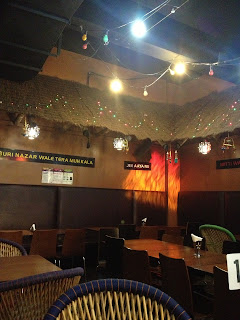