This is prime location on Swanston Street and should do well. However, it is plagued by inconsistency and so, while usually busy, it only gets a middling rating for me and a pretty low score from Urbanspoon. With its location, if it was good, there would be lots of people raving about it but unfortunately, that's not the case.

The Place
This is a not a comfortable space as the furniture is of the kind that gets you in and out as quickly as possible. Sometimes, the place feels a bit greasy as well. Mostly though, this place has the potential to be better than the fast food joint cafe it currently is. They are clearly targeting quick meals and smallish groups. Ventilation here is not fantastic and it can get really cold or really hot depending on the weather outside. It's easy to see why that's the case because the whole frontage is open most days.

Things to do nearby: Bourke Street Mall and Swanston Street Prime Shopping Area

The Food
The main issue here is not that it's not good food but that it's not consistent. It's not even attributed to how busy it is. I have had both great and very very average dishes here when it's really busy. There are a couple of highlights here for me; 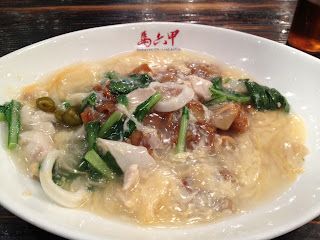 Combination Noodles - one of the few places that make Wat Dan Hor with two types of noodles like they do in West Malaysia, so you get the smokiness of the flat rice noodles and the crispiness of the rice vermicelli. However, while I have had great versions here, my most recent one was pretty average (pictured here, without prawns, normally comes with succulent prawns)

Indian Mee Goreng - with a hint of tomato sauce, a lot of spice and beancurd puff. This is pretty good.

I am not a fan of their nasi goreng and their laksa here.

The Service
Again, the issue here is consistency. While they are usually non-obtrusive but attentive, the politeness varies from time to time. However, overall, they are pretty down to earth and friendly. I think that the service is actually better than most eating houses of a similar standard.

Overall
I would go here once in a while for a few dishes which I know they do well. It's not a hangout place and so, it's a quick meal and then you're out of there. It is not as good as some of the other places within walking distance but I won't rule it out, just to break things up a bit very ocassionally.

Cultural Moment
Malacca is one of the straits states of West Malaysia on the Malay Peninsula. It was a major trading port for a long time, untill Penang and later, Singapore took over as the pre-eminent port city of the region. It has a long history of multiculturalism, with the arrival of the Malays, the Chinese (15th Century with Admiral Cheng Ho and Princess Hang Li Po) , the rise of the Peranakans (with the settlement of the Chinese and inter-marrying with the locals), the arrival of the Portuguese from Goa (conquering the area in the early 16th century and bringing with them Roman Catholicism), the Dutch then taking over from the Portuguese in the 17th Century. It has a rich cultural heritage with each arriving culture leaving its mark quite significantly. St Francis Xavier actually spent some time in here.

The diverse cultures of Malacca are not necessarily represented here in the cafe, which is dominated by Chinese cuisine, some Malay and Peranakan influence here and there. Much more could be done to highlight the Peranakan cuisine which is largely absent in Melbourne.