PappaRich (QV) has a surprisingly low score on Urbanspoon given the queues here during peak hours. I think you either like their style of service or not. As for the food, it's not bad at all and I think it's better than some of the other chains from Malaysia or Singapore. This is primarily a West Malaysian chain that serves common West Malaysian cuisine of the hawker variety. I have had food from their Kuala Lumpur branches before and this might sound sacrilegious to some but I actually think they serve better food in this outlet in Melbourne. This is a Halal chain. 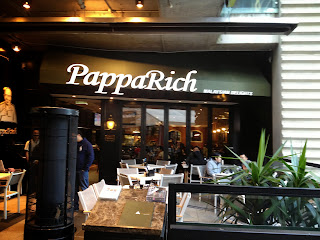 The Place
I am not a fan of queueing but sometimes, that's inevitable here. The decoration is a mix of different styles from Malaysia. It's usually pretty packed and there's a nice buzz to the place from the number of diners here. You do sit pretty close to others even though there's a huge floor space. They do pack you in. This is not really a kid-friendly space because of the proximity to fellow diners - makes it a bit difficult. Lastly, if you were driving, it's best to park at QV.

Things to do nearby: QV, Melb Central, Chinatown and the State Library. There's plenty of things around.

The Food
The food here is not bad at all and most of their dishes are better than the competition around town. While not everything's perfect, most of it is better than average. Some highlights here include:

Chicken Rice - this is not bad at all and it comes with a generous serving of beansprouts (which is a bit unusual) but the chicken is tender and the rice is pretty fragrant. Not the best in Melbourne but better than most because of the quality of the white cut chicken.

I have to note that their Nasi Lemak is not as rich as it could be and for a supposed Malaysian chain, their Roti Canai is more crispy (the way Singaporeans like it) than fluffy (which is the usual Malaysian preference). Their Laksa is pretty tasty too but not spicy enough for me.

The Service
This is where it gets tricky. I understand that being set in QV, rental is probably at a premium, therefore prices are higher than you average Malaysian eatery around town. However, the problem is this, when people are paying more for their experience - it's not just food they are paying for, but service as well.

There are a number of pressure points with the service here. First, queue management can be an issue with the whole thing going very wrong very quickly because it's a fine edge to try and seat a big group ahead of a couple that's been waiting a while. Second, once you are in, they have to try to explain how the self-ordering system and waitstaff call button works. If you are surprised by this, you might not be listening and fuming at bad service for what you might consider a restaurant in a premier location. Third, PappaRich is expecting their diners to get over the whole self-order concept in a premier location at higher than average price. Fourth,  with the self order, it's hard to actually request variations to the meals because there's not much you can write on that small piece of paper and your handwriting might not be legible (gasp!). So, variations usually lead to something different to what you might expect.This was always going to be tricky and I suspect very strongly, the reason for the lower Urbanspoon Score. Fifth, because it always feels such a rush, the waitstaff can come across as brusque and uninterested. Finally, the credit card use policy of having to spend more than $25 is just plain silly in a QV outlet.

Overall
I would go to PappaRich again to try the range of food, but I would not queue for this. If there's a queue, I can easily find better options close by. The reason I'd go to PappaRich is because of the variety they have but I won't put up with borderline service.

Cultural Moment
When a successful Southeasteast Asian chain makes its way to Melbourne or anywhere in Australia, it usually excites those who have lived in those countries to compare (eg. "It's just not like home"), those who were not aware of those places in the first place (eg. "what's the big deal?") etc. It's difficult to live up to the reputation of the chains back home for a number of reasons.

For those who are not familiar with the Southeast Asian chains, when they hear 'insiders' rave about it, they want to know what the big deal is. Of course, the built up of expectations is a double-edged sword. It's a tricky one knowing that taste buds are highly relative to what they are used to. The question of balance between authenticity and suitability to local tastebuds is usually what decides the success of an Asian restaurant in Melbourne.

In addition, memories can be vague sometimes and food memory tinged with sentimental longing can make the food back home seem much tastier than it actually is. The reality is that there are many other food outlets that do better than these chains back home. So, when people say "It's just not like home", I suspect they are usually comparing it to the best experiences they had back home - and not necessarily a comparison to the chain's performance back home. That's not quite fair, right?

Then there's the issue of ingredients. As much as Melbourne is highlight multicultural and the range of ingredients is impressive, there will always be differences on two fronts. Not all the ingredients from Southeast Asia are readily available in Malaysia. The quality of fresh produce is completely different between the two regions -the vegies, the meats and the processed meats are all different in texture, taste and quality. That makes it quite hard to replicate everything exactly the same. I would argue that in some cases, the food in Melbourne is of better quality than so called "back home" because of the freshness of the meats and vegies.
Posted by Shanton at 17:37