Part of the trilogy of Vietnamese Restaurants on High Street in Northcote, this is the last one I am reviewing of the three. It's also the one with middling rating compared to the other two at 75% approval on Urbanspoon. I think it's rather Chinese is some ways because the Vietnamese dishes are a bit lack lustre. Because this is the last of the three Vietnamese Restaurants on High Street, I am going to do a bit of comparison with the other two.

This is actually the best looking Vietnamese Restaurant on High Street - the requisite mirrors are there and not over the top decorations. The lighting level at night is also good. Sound insulation and ventilation is great. It is a good space though there are no round tables for bigger groups. It is also the cleanest feeling of the three joints.

Things to do Nearby: High Street Shops and Northcote Social Club is not too far away.

The Food
﻿ ﻿
If I had to rank to food of the three places, my favourite would be Yen Yen, followed by Bang Bang with Lâm Lâm a distant third. I find Bang Bang like its relative location to the other two is smack in the middle because there is a greater level of authenticity but overall, it's not very well presented nor the tastiest. Their entrees are usually presented with no garnish which makes it look rather unloved. I know, it's a minor thing but lots of people eat with their eyes too - it has to look appetising.

In terms of the tastiness of the dishes, it's not bad and there's a mix of really authentic ones and fried flat noodles (that look like char kway teow with curry powder and lemongrass) - which makes them neither here nor there. Because nothing stands out and nothing is particularly disappointing - there's not real highlight here one way or another for me.

The beef noodle soups are not all that tasty and doesn't carry with it the rich been stock of the best Vietnamese restaurants. This makes it rather generic tasting but at least its not overly sugar sweet (which is completely wrong). The soup is also not very hot when served. 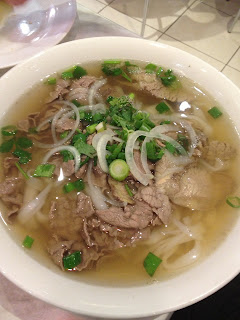 The Service
The service here is the most attentive of the three. Though not always smiling, they do pay attention and the times I have been there, it's been most effective and relatively friendly, and really quick even on a busy night.

Overall
So, comparing the three places - I would tend to go to Yen Yen as my first port of call in the area. However, ocassionally, I'd give Bang Bang another go. Lâm Lâm is not always to my taste because it's too westernised.

Phở is arguably the most iconic Vietnamese dish in Australia and the most well known even to non-Vietnamese diners. It's a bit ironic then that even the Vietnamese acknowledge that this dish didn't become widely popular even in Vietnam till after the 1900s. Even then, it did not take off in Saigon/Ho Chi Minh City till the mid 1950s. I have to say, having been to Vietnam that I prefer the Hanoi Style of more herby, savoury tasting soup than the more sweetened Pho Saigon.

Those of you wondering what's in the Special Beef Combination Phở that's served in many Vietnamese restaurants, (other than the beef brisket and sliced beef) here's an example of ingredients might be included from the most common to the less common and really 'special stuff'; (are you ready?) tendon, tripe, beef balls, beef black pepper sausages, marrow, pizzle (know what that is?) and blood jelly. Many places stop at the beef balls while the most hard core ones can keep going. Enjoy!
Posted by Shanton at 03:22