I have never been to the Yunan region and cannot vouch for the authenticity of this place. However, it does remind me of the eating houses in the backstreets of other parts of China where they haven't really catered to tourists of any other cultures - except maybe rural-urban migrants. It feels authentic, the other diners slurping away at their meals makes the place feel very authentic and the greasiness of the food too reminds me of many parts of China. I also have confirmation from a fellow blogger (who's from Yunnan) that this place IS authentic. Check out her blog entry on this restaurant at Sweet and Sour Fork. This is not as cheap as many of the Chinese eating places that has sprouted up in Melbourne in the last 5 - 7 years.

The Place
Situated on the corner of Swanston Street and Grattan Street, the target market here is clearly the large number of Chinese International Students studying at The University of Melbourne and RMIT University. The place is set up as a no-frills diner that has just passable cleanliness and you are situated pretty closely to other diners. It is a licensed venue and sound insulation is not that great. Parking is ok round Cardigan Street in the back. This is not a kid friendly place in my opinion.

Things to do Nearby: Lygon Street and University of Melbourne are just around the corner.

The Food
This is hardcore mainland traditional Chinese fare. When they tell you it's hot - it's CHILLI hot. Don't play with fire if you are not used to this cuisine. This is not a place for your tame Cantonese and Southeast Asian Chinese cuisine. The dominant flavours here are chilli, vinegary sourness, soy and intense savouriness. Also, the dishes here use oil pretty liberally and so, by Australian standards would be considered very greasy. The greasiness also means that when the dishes first come out (especially the fried noodles), it can be blistering hot (not just chilli hot).

Suffice to say, this is not for everyone and the clientale is dominated mostly by mainland Chinese students (their clear target market) who all seem very happy with the offering. They serve Yunnan's most famous dish - Cross Bridge Noodle - which is their version of the hot pot in a bowl of Chicken soup, and thin slices or meat and fish are ingredients, together with their mixian rice noodles. The menu at Colourful Yunnan tells the origin story of this noodle. 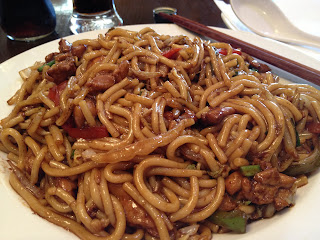 There's also a range of Fried Noodles with a range of meats, spicy or non-spicy. If you are a novice to the world of spice - go for the non-spicy one. The picture to the right is Fried Noodles with Chicken. Notice the gleam of the grease. There was actually a lot of chicken in the dish. The smoothness of the rice noodles were fantastic. It was yummy but I think it would have been better to share it with someone else and having another less greasy dish to go with it.

Then, there's the famous Spicy Fish dishes - you just have to look at it to feel the chillies. It's not for everyone but I am sure it brings back wonderful memories for many Chinese Students as this is a popular dish back home.

The Service
I actually think the service is not bad at all despite some other reviews on Urbanspoon. You just have to ask and check if you fill that you have been ignored or they have forgotten something. The are not rude and uninterested - just a but disorganised and ocassionally flustered when busy. They make up for it with being apologetic if they have made a mistake and are generally friendly.

Overall
When I am feeling like an adventure and something quite different to what I would normally gravitate towards - I'll venture here to try a new dish I haven't tried before. I can almost imagine some of the dishes because they sound almost familiar but I know they are different to what I know. So, for me, it's not my range of comfort food. It's in the range of adventurous dishes and it's not a place I'd take just any of my friends, just those who are at that very point - feeling adventurous.

Cultural Moment
Yunnan is a region of China that borders the Southeast Asian Indo-China countries of Burma, Laos and Vietname. They also have the largest number of Ethnic Minorities in China - quite different to the Han Chinese. This means that even to the rest of China - there's a certain level of exoticness in the cuisine. Also, because they border the Southeast Asian countries - their dishes are also most likely to use lemongrass and other spices from the region.

Like I keep saying, not everyone is going to like every cuisine in the world. There are some cuisines that would present more of a challenge either because its less common and so, we are less aware of it, or it's just not our style of food. There's no point judging such cusines by the same standards we are used to. It's like going to Japan and complaining "Why don't they speak more English?", it's ridiculous right?

For me, Yunnan cuisine represents an culinary adventure for me. If I can get past their greasiness - I think I will learn more about this cuising over time. Maybe one day, I'll have another story to tell. Maybe I should plan a trip to Kun Ming.
Posted by Shanton at 00:25