Once upon a time, this as a place to be, and even the likes of Elizabeth Chong, would have been seen here. For those who don't know, she was probably Australia's first Asian Celebrity Chef, with award winnng books, and appearances on TV, introducing Australia to Chinese food. Dragonboat was a bit of a standard bearer but in the last 5 - 7 years, things have gone downhill a little bit, even their website hasn't been updated for at least 3 years with old pictures. Maybe, this is why the Urbanspoon rating is so low.

This particular branch was renovated only few years ago and stands out as probably one of the best laid out and most tastefully decorated contemporary Hong Kong style restaurants in Melbourne. Other than the ridiculous stairs they make the elderly and the kids climb, this is really quite a nicely set out restaurant. It's got a great ambience. Initially, after the renovations, they had balcony dining as well but this has since been covered up because of the unpredictable Melbourne weather. Lastly, there's also a "side cafe" attached to the restaurant, where you can sit quite informally (limited space) and pay a much lower price for your dimsums - this is more cafe and takeaway style.

Things to do Nearby: Set in the heart of Chinatown and in the same arcade as JB HiFi on Bourke Street. This is pretty much the centre of town with heaps of shopping to do.

Since the renovations, Robbie and I have been twice. Disappointed the first time, we thought we'd give it another go about 6 months later. I have also been a few times prior to the renovations. The food here is generally quite disappointing but there is one bright spark. I reckon that this place has the best Pork Spare Ribs (spiced) and it just rocks, with the right amount of spice, salt and is not to greasy. However, that's kind of where it ends. The disappointing dishes included; rather dry Lotus Leaf Sticky Rice (with too much dried shrimp); Congee that was thin gruel with tiny tiny tiny bits of pork and no trace of century egg, Beancurd Roll that was contaminated by the bits of capsicum they threw on the dish as a garnish; and the worst of the lot - sweet Siu Mai - sugary sweet and so wrong.

It's just not to my taste - probably because I like my yum cha a bit more savoury and saucy rather than dry and sweet. So, for the amount I am paying here and I do feel it's more expensive to a number of other places (maybe because of its location) - I am not going to be coming back in a hurry. 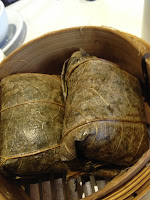 The service was pretty bad the first time around with wati staff who weren't sure what they were doing and were completely inflexible and not very knowledgeable about their offerings - for example, every single dimsum was "dumplings". This time round, we had a couple of wati staff who were able to explain their range of offerings - so it's perhaps the luck of the draw.

Overall
If I happen to be close by and am by myself and wanted quick take away dimsum, I'd go to the side cafe and order a few things to takeaway. However, it's probably not worth me going another time as I question the value for money - which is a pity for me because it's such a pretty space.

Cultural Moment
This is Robbie's observation - 'this is gweilo yumcha'. I didn't say it! Robbie's caucasian - so he can get away with it. It's somewhat westernised I think and as pointed out too - more than 75% of the diners where are caucasian. Half the Asians here were not Chinese, and the rest maybe were tourists?

The term 'gweilo' is a Cantonese term that is used to denote Caucasians. It actually translates roughly to "Spirit/Ghostly Fellow" - referring to the colour of the skin. It is said that in their first encounter with the Europeans, the southern Chinese thought that the they were spirits - (which is interesting as many indigenous Australians stories say the same thing about their first encounters with the Europeans). So, a woman might be referred as "gwei poh", a boy "gwei zai" and a girl "gwei mui". While it does sound racists - many expatriates in Hong Kong actually own the term and would even refer to themselves as such. It's not necessarily a derogatory term, though it can be used in a derogatory way, depending on the tone. If you are really interested - there's an autobiographical book titled "Gweilo: Memoirs of a Hong Kong Childhood" by Martin Booth.

Incidentally - I didn't grow up using those terms to describe Europeans - in Malaysia and Singapore, ther term used was 'ang moh', which translates to "Red/Copper Hair", again describing that which is the most obvious difference between black haired Asians and other foreigners. 'Ang Moh' on its own is purely an adjective and not meant to be derogatory but again, in the most racist instances (yes! they exist everywhere) the adjective could be added to any other noun that are much less flattering. The terms 'ang moh' is Hokkien, not Cantonese, and it always amuses me that it is actually similar to Aussies use of the term 'rangas', except, 'ang moh' refers to ALL Caucasians, not just our beloved copper fiery ginger friends.
Posted by Shanton at 04:27