Yet another in a string of Shanghainese Dumpling Place that has sprouted in the last 4 - 5 years, this is proof that Melbourne's appetite for Chinese dumplings is continuing to grow. It has lines nearly every weekday lunch and early evening. Yes, granted it is a small space but there are plenty of small places that have no lines or diners. The reality is, if there was more space here, I'd be here a lot more to dine in. 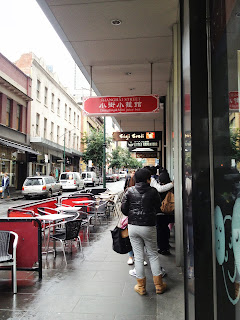 This is a really small space that can barely seat up to about 18 diners, including some on the footpath outside. The good things is that they don't cramp their seating and so, though small, it's not too pokey. It's a basic no-frill dining space and not built for a romantic dining experience. It is also less greasy and grotty than some of the other dumpling places around town. Check out 3 metre long the queue at lunch time on a rainy day (because they can't sit outside)!

Things to do nearby: Set near the GPO Building, Elizabeth Street and Bourke Street Mall, there's plenty to do if you're looking to shop.

The Food
The dumplings and noodles here are really good. The fresh dumplings are really good and tasty, and the noodles are fresh and of good quality. Just a few things to note in terms of the different styles of dumplings;
Wontons have lighter smoother thinner egg based skins - perfect as a snack or entree. Their Wontons in Chilli Oil here are quite amazing and comparable to Hu Tong Dumplings. It's a big call and I am making it.
Peking Dumplings tend to have thicker skins and could be a meal on their own, needs substantial sauce to go with it, so don't be shy about dowsing them with sauce (soy or if like me, you might prefer vinegar).
For more of an exposition of the different types of dumplings, please see the Cultural Moment section, which is a repeat entry of an earlier blog post.

The Service
While it is not ideal, the service here is simply better than that of many of the other cheaper dumpling cafes around town. So, although complicated orders might present a challenge if you are ordering in English, there's generally more courtesy and effort here than most other places. Quick service like many places, dishes seldom come at the same time to the same table.

Overall
I reiterate that the food here is good. The problem is seating and space - there's just not enough and if you are hoping for a sit down dinner, you have to be patient, and it's not a place for groups of 5 or more. You'll just add to the chaos. If it was not for the space, I'd be there a whole lot more.

Cultural Moment
Different dumplings have quite different names in Chinese.
This is taken from an earlier posting but I figured if you are after dumplings, knowing the differences always helps order the right ones to satisfy your cravings. There are subtle differences in terms of which flavours work best with which style - so, here's to getting to know your own preferences and your dumplings.
Guo Tie (literally Pan/Pot Sticker) refers mostly to dumplings that are panfried and parts of it has stuck to the hot surface. So, they tend to have thicker skins.

Shui Jiao (literally Soup/Water Dumplings) which tends to be served in a broth (of different varieties). These dumplings would have really slippery, delicate, and thinner skins. Mostly, these are filled with various combinations of seafood (prawns in particular) and pork.

Zheng Jiao (Steamed dumplings) refers to your steamed dumpplings which usually has meat and vege combination fillings. Of course, there are many varieties of this in the Yumcha places. However, the main Zheng Jiao are the steamed ones which are pretty chunky (unlike their delicate yumcha dimsum cousins). The vegetarian dumplings are best served steamed.

Yun Tun / Won Ton are Cantonese style dumplings and usually smaller in size and may have egg based skin, rather than the rice flour based skins of the earlier described dumplings.
Posted by Shanton at 21:29