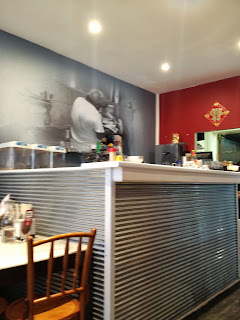 So, I am originally from Sarawak and bemoan the fact that very few places anywhere else in the world serves Sarawakian dishes. In addition, many Malaysian restaurants that purports to offer Sarawakian dishes usually get it completely wrong. So, how does the latest Sarawakian in Melbourne stack up? The low score on Urbanspoon suggests one thing to me - unfamiliarity with the cuisine plus modifications made here leading to the dishes being less than what they should be in terms of taste.

The Place
This is a small dining place that seats about 30 in and outdoors. When it first opened, there were queues up at lunch constantly. It's a relatively clean place and functional.

Things to do nearby: It's a 4 minute walk to the Queen Vic Market.

The Food
So, I am going to focus on the Sarawakian dishes. If you have never been to Sarawak before, you may be unlikely to have had the food there, so it may be hard to compare. However, I have had this food most of my life and no one's going to fool me.
Kolo Mee (pictured above)- this noodle dish is even more widely sold in Sarawak and more dominant in Kuching (the largest Sarawakian city). They use the same noodles for their ko lo mee, as they do their kam pua mee. This is not quite right for the diehards though still exceptable - most places in Kuching have noodles that are springier and thinner than the ones served here. However, the basic taste is there. One suggestion I have for punters to make it more authentic - ask for more vinegar to go with it. In addition, you need the meat sauce to make it worth the while and authentic. That's where the taste is - with the shallots is.

Sarawak Laksa - is not authentic - to the point where some reviewers on Urbanspoon say it's similar to the Curry Laksa offered by Killiney Kopitiam. Ok, admittedly, it has a nod to the herbal shrimp belachan taste that's prominent in Sarawak Laksa - but it requires more belachan and less curry. The travesty is the use of BBQ Pork (Char Siew - sweetening the soup), bean curd puff, and fish cakes! Dear Kitchen Inn owners - you know this is not how this dish is meant to be served - if you need help with this, please go to my exposition on the different types of Laksas in this other posting.

Kam Pua Mee - the quintessential Sibu (3rd largest Sarawakian city) Fuzhou/Foochow dominant town hawker dish. This is pretty close and it is served with BBQ pork slices and mince pork sauce. The trick is in the sauce and the quality of the noodles. The noodles here are good and you will note it is different from your average noodle used in wonton noodles, egg noodle dishes or hokkien noodles. Where it is different to the dishes as served in Sarawak is in the fundamental difference between BBQ pork in Australia and BBQ pork in Sarawak. BBQ Pork is Sarawak is actually very subtle and has a light salty taste and sliced thinly. In Melbourne, BBQ pork is rich, thick, salty and sweet because it's prepared mostly by the Cantonese who are best at making them. As a result, it colours all the dishes it is served with. No exception here as it enriches the taste of the Kam Pua Mee here.

Special Side Soup - served here is a basic clear soup with pork liver - normally I would love this but here, it's usually incredibly salty! Soups like these are served in Kuching as almost to cleanse the palate as it is a clear subtle soup. This is not the case here.

So, I have been here about 4 times to try these dishes a few times to get the sense of it before writing this review - but obviously, there are other dishes on offer here. Once I have had them, I will add to this article. I do hope they get better because I do want my fix of kolo mee with extra vinegar here.

The Service
The service is what I call shy reserved Sarawakian - anything but effervescent. It's not that they are not friendly - they are, but it's tinged with a bit of shyness that might come across as aloofness or lack of confidence. I see this all the time in Kuching.
Overall
I go there for the kolo mee and hope that it improves over time because it's so difficult to find.

Cultural Moment
Sarawakian food is quite different to most Malaysian dishes one would get in Melbourne. This is because there's a whole range of ingredients that are not easily available in West Malaysia, the influence of local Dayak and Iban cuisines, and the dominance of Hokkiens and Foochows dialect groups amongst the Chinese (rather than Cantonese). In this section, I am going to focus on the ingredients and some special dishes from the region.

Kachangma - which is made from dried Chinese motherwort, and combined with ginger (lots of it) and chinese intense cooking wine, with chicken. Not for the fainthearted. You need to be able to cope with the ginger, herb and the alcohol.

Tomato Noodle/Kway Teow - this is really Sarawakian. It's your crispy noodle or flat rice noodle (kway teow) fried with a tomato based sauce (with bbq pork, slices of fish and squid/prawns and Chinese vegetables). Really yummy and can be replicated even in non- Sarawakian kitchens with quite common ingredients.

Sarawak Laksa (this is from a previous posting on laksas) is the laksa I grew up with and therefore - the best. Ha ha! This is completely different to the other two laksas. It has no curry base and it not tamarind sour. It has a more sambal belachan, galangal and herbal base, with light coconut milk. The ingredients are completely different to the other two as well. It uses vermicelli only, shredded chicken, shreded plain omellete (which absorbs the laksa soup), been shoots, shelled prawns and a generous serve of cilantro. Lime and fried sambal belachan on the side to taste. For true Sarawak Laksa - one really has to go to Sarawak.
Yellow Eggplant (Terung Kuning) - is indigenous to Sarawak and has a sour taste - and fantastic in fish soups.

Midin (only available in Sarawak) and Paku are two different varieties of wild jungle fern and locals really love, cooked with belachan and sambal. Midin in particular is a distinctive Sarawakian dish.

Cangkok Manis / Mani Chai / Sweet Leaf is a local leafy vegetable loved by the locals, whether indigenous, Chinese, Malays  - not me! I hate it!

Tebaloi - a traditionalfragrant hard Sarawakian cookie made from Sago - the best ones are made by the Melanaos but there're everywhere these days in Sarawak. They look like thin flat sheets.

Lemang - is simply divine. It is glutinuous rice, cooked with coconut milk and salt, in hallow bamboo sticks, lined with banana plant leaves. Beautiful with local curries. So yummy

There's many other fantastic dishes from Sarawak but I could go on and on. If I have peaked your interest - you should google Sarawakian cuisine and you will find many Sarawakians like me living overseas who reminisce about the dishes from home because, they are really difficult to get elsewhere in the world.
Posted by Shanton at 23:05