It's a big boast for authenticity to have a restaurant name that includes "Eat like Malaysian", a challenge if you will, and it bears out in the attitude of the wait staff who are clearly proud of their authenticity. Firstly - here's a minor gripe - I might say this should be "Eat like West Malaysian" because there are no East Malaysian dishes but this is an in-country issue that Malaysians should deal with and I don't need to bore you with it. So, having said that, is their food authentic. I would say 'Yes' but then there's all sorts of places in Malaysia that serves authentic Malaysian dishes - it doesn't mean I want to eat there if it's not up to standard. There's a difference between authenticity and tastiness and quality. Chai is also more expensive than even some of the Malaysian places in the CBD. 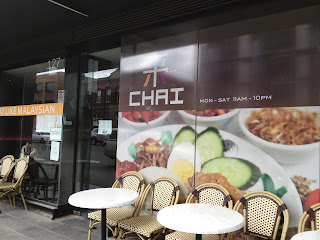 The Place
Small place that can probably seat up to 40 with surprisingly good sound insulation. Air conditioning here always works which is a plus on hot days. There's not a lot of atmosphere and it feels more like a basic cafe. Parking is generally not a problem in this space despite it being close to Swanston Street and Lygon Street.

Things to do nearby: Lygon Street is not too far away. 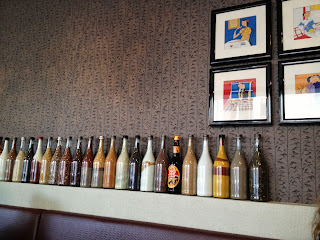 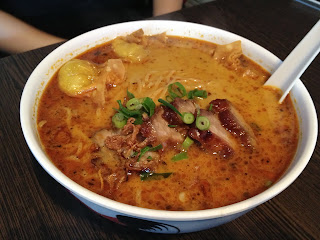 The food here is generally authentic but of middling tastiness. All the hallmarks of West Malaysian cuisine are here, Char Kway Teow, Curry Laksa, Assam Laksa, Hor Fun, Hainanese Chicken Rice, Nasi Lemak. They are pretty good overall but nothing to really rave about, except the Laksa - the Laksa is pretty good and rich (pictured to the right). I find that the dishes here are 'safe' in that they don't go out of the way to pack a punch.

For me, the best dish here is their Nasi Lemak which comes with a range of condiments, and good spicy chilli. It's not too greasy and wet, it's light and fluffy and tasty.

At the same time, the Char Kway Teow (CKT), which  although nice, is below par because from the one I have had here, I believe that it was put together rather than freshly cooked. Let me explain. CKT involves the use of the really hot wok to invoke a smokey flavour. It involves freshly cracked eggs and garlic fried together at the start, and prawns/fish cakes/Chinese sausages that are thrown in to cook with the rice noodles. The CKT here uses pre-cooked eggs and prawns. So, while I have no doubt that they fry it all up together at the end - it's just not the same as having it all freshly cooked.

So, as a result, the dishes are relatively authentic but some of the short cuts means that it is not as tasty as it could be.
The Service
I have never had any problems here and most of the wait staff are knowledgeable and are clearly proud of their dishes which is really nice to see. Pleasant service , with friendsly smiles, and non-invasive. All good for me.

Overall
Chai remains one of the few places in Carlton that serves relatively good Malaysian fare in comfortable surroundings. I will continue to go there though recently - Killiney Kopitiam (which is Singaporean) and serves some similar dishes has opened up up far away on Lygon St.

Cultural Moment
Hawker food in Cafes can lead to disappointments. As I have said elsewhere, in most of SEAsia, hawker stalls tend to serve one or two specialties. In Melbourne and Australia in general, many restaurants and cafes serve a range of dishes without specialisation. This can lead to short cuts being taken resulting in below par food (no matter how authentic).

Some of the hawker stalls in SEAsia live on the reputation of the one specialty they offer and do extremely well. Realistically, we are never going to have that here in Australia - though I remember in 90s, Ong's Food Court at the bottom of Myers on Little Bourke did try that concept but it eventually lost out to competition as it failed to upgrade and the food became more and more generic.
Posted by Shanton at 21:19