This is a West Malaysian place - clearly, distinctly and proudly so, not to be confused with Singaporean tastes. Singaporeans tend to prefer their Prata to be crispier and to achieve that, it tends to be a bit greasier. Malaysians tend to have Canai that fluffier rather than crispy - that's what I have seen all over Malaysia and Singapore. It is still very popular and queues go on as late as 8pm on weekdays. It is also pricier than many other Malaysian eating places. Ok - I hate to say this but too many people expect to pay Malaysian prices for roti because after all, it's just 'bread' - but this isn't Malaysia and the number of wait staff they have here and the efficiency speaks for itself. The main question of course is whether it is worth waiting for? I think it's not bad at all but depends on what you are looking for. However, there are some reasons why some might not like it and I will explore these in this entry.

The Place
This is near the corner of Lonsdale Street and Elizabeth Street. It is a busy noisy place, and not for those who like a bit of quiet. The ambience is a noisy mess hall with everyone trying to outdo each other. While the tables are set wide apart enough, it doesn't stop the noise from being somewhat overpowering at times. This doesn't seem to deter most of the diners I saw here. It's not a great place for kids and can be a bit overwhelming. The airconditioning here is great and that's amazing given the Roti kitchen is set within the restaurant itself. Parking is not great on Lonsdale Street itself.

Things to do Nearby: Melbourne Central is nearby, and QV is about a block and a half away. JB HiFi is just 2 doors down.

Mamak cuisine is strongly influenced by South Indian cuisine, but with a Malay twist especially with the curries. There is no questioning the authenticity of this place but whether it is nice or not is discussed here. My crew ordered a number of dishes to try range of Mamak offerings.

Mee Goreng - is really good here with al dente Hokkien Noodles and the right balance of spices. It was my favourite dish of the night. It is of the drier Malaysian style of Mee Goreng, unlike some of the more soggy and wet Singaporean styled mee goreng, Therefore, this is authentic and yummy, though my personal preference next time is to ask for extra lime, to give is a bit more tang.

Roti - there is no doubt that the Roti here is of high quality. I watched them doing it fresh and yes, why would you go to a number of other places that sell frozen roti when you can come here for fresh made roti that's not too greasy. Well done on this front - though the accompanying gravy needs some improvement and there needs to be more of it. The murtabak was ok but really thick and because it's not greasy like the ones in Malaysia, it is a bit dry and it is much thicker than many of the places in Malaysia. It also needs a bit more seasoning though the whole point is to let the curry gravy seep through (though there's not enough gravy here). Overall the roti quality is impressive. 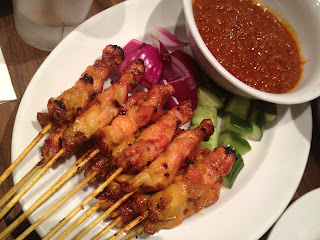 Satay - was the biggest disappointment of the night for me. Don't get me wrong, it is a well presented and tasty dish. The meat is relatively well marinated. The sauce was sweet and while the amount of nuts and spice was right - the sweetness was all wrong. Therefore, it was not to my taste - but if you like sweet satay sauce - go for it - definitely much better some of the horrendous deep fried offerings some places have. 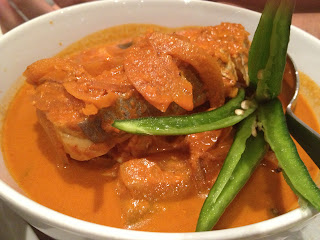 Kari Ikan - The fish curry is very KL (Kuala Lumpur) and tasty but not as tangy as some of the best offerings from Malaysia. They also use the Malaysian prefered cut of fish, and the vegetables (tomatoes, okra and eggplant) that go with the curry are beautiful.

The Service
For such a harried place - the service was really good and friendly, and given the amount of activity, it could go wrong so easily but that wasn't the case here. Minor mistakes in timing is easily dealt with by calling their attention to it. This is really well done and the wait staff is well trained. Most of our food came together when it was supposed to, even when the dishes are coming from different stations of the kitchen. It is certainly friendlier and more personable than many of the other Malaysian and Singaporean places to eat.

Overall
I'd go again because overall, the food is not bad but just for a quick meal and not as a place to hang out because of the noise level. The things that stand out for me here are the rotis and the mee goreng. I am also impressed with the service and they clearly have a pretty good system going. I am also excited by the wider clientale that seems to be enjoying mostly authentic West Malaysian fare. The one thing that's not authentic about this place is that you can't really hang out here - like many of the Mamak places in Malaysia. 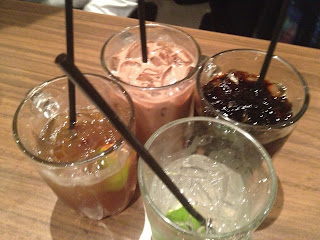 I spent a whole year eating Mee Goreng 2 times a week from a Mamak Stall in Singapore - I used to give tuition to two kids, when I was a teenager - and they would buy me food from their favourite stall and their favourite dish. Why did I now say something about variety? Because I was just grateful and didn't want to create a fuss. However, what is Mamak?

Mamak is a term that refers to Indian Muslims, primarily in West Malaysia and Singapore. Historically, they have been in the area for a very long time as trading between the Malay peninsula and the Indian sub-continent dates back to 800AD (or even before). The term Mamak actually means Uncle originally though most Chinese don't actually know this. There are those who find the term somewhat derogatory while others have just used it as a descriptor of a culture. It's all in the tone - like many other terms we use to describe cultures other than our own all over the world. It can be either affectionate, descriptive and perjorative but usually not mutually so, depending on the person using the term - know what I mean?

A Mamak Stall is a real hangout place for many young people in Malaysia in particular because of the cheap and tasty dishes, by the road sides. However, like the 'dhabas' of the Punjabi region, some more successful Mamak Stalls more recently have evolved into Cafe style eating houses with air-conditioning - some are even opened 24 hours. The best ones sell the most reliable and tasty usual Mamak fair of roti canai, curries, mee gorend, maggi goreng and rarely - Indian rojak which I love but can't get in Melbourne.
Posted by Shanton at 02:57