This is the perfect example of  how a good or bad Urbanspoon score may not necessarily help the diner. It really depends on who's rating it. There are clear limitations of such a rating system - because it seldom tells you who's rating and worse - what's their taste. Hence, a blog is perhaps better because you start to understand the raters - what their tastes are and the context of their review. So, what's my issue here? Some 500 raters and nearly 90% of them liking it... who are they? I know people who like it and I am not one of them, primarily because the only authentic things about this restaurant are their name (clearly Vietnamese), their polite and friendly service, and their springrolls.

The Place
Like one of many bright Vietnamese cafes with little ambience. This is more a quick meal place than a restaurant to dine in at leisure. Nothing wrong with that because there are plenty of functional places like this all over the world. It works just fine for a quick meal.

Things to do nearby: Northcote Townhall when there are events. Also shops of High Street, Northcote.

The Food
Let's begin with the positive. Their crispy fried springrolls are typical of many Chinese restaurants and ther ones here are crispy on the outside, tasty on the inside, served with fresh lettuce. Yummy start to any meal.

I have been here four times and ordered different dishes. There's nothing very Vietnamese about the dishes. Many of their dishes are similar to many basic westernise generic Chinese dishes, and pho to serve the Western tastebud (a lot less beefy, herbal and sweeter). There are times when I look for this particular style of cuisine. There's nothing wrong with that of course, and the line of customers evening after evening is testament to this. 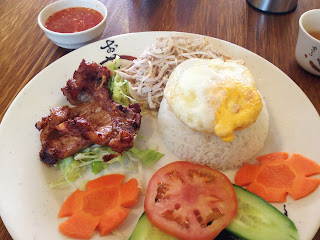 Beyond pho, the most common Vietnamese dish is probably Broken Rice. At Lâm Lâm, the menu states that they have a Special Vietnamese Combination (Grilled Pork, Shredded Pork, Fried Egg on Rice) - it looks like what you would expect of Broken Rice Combination - but it's actually just normal steamed rice and there's no egg paste with it (pictured right). The sauce was good though with a slight kick to it.

It can be nice - it's just not authentic Vietnamese. I will spend some time a bit later (in the Cultural Moment section) discussing westernised SEAsian Chinese cuisine.

The Service
Quick service for a fast food place and generally very friendly even under the pump. Timing of dishes can be an issue if you are ordering individual dishes but if you are sharing - you might not have to worry about someone's dish coming first and the others having to wait a while.

Overall
There's always a saying amongst diners everywhere, "When going to a busy restaurant, it's important to see who's dining there. The clientale reflects the style of food." This is a fail safe observation on the surface most of the time. It applies here too. The clientale on any given night is 99% European diners, so it's not surprising that the dishes here tend to suit Western tastebuds more. At least once a month, even this Asian diner likes a bit of faux-Asian.

Cultural Moment
Faux-Asian - what is it? This particular style of food is characterised by;
Sizzling plate of anything - Originally, the sizzling plate is used for dishes of where the meat is well marinated, and simple vegetables. The idea is that the sizzling plate is so hot that the thin slices of meat will cook quickly on the really hot plate, and you put in the sauce and the thin sliced vegetables and even eggs in some dishes and it cooks in front of you. (Yes, it's like teppanyaki - in fact teppan comes from the Chinese words 'tie pan' - steel plate) Nowadays - many sizzling plate dishes are essentially your stir fry served on a sizzling plate to keep it hot and dramatic - to me, it's more for show than taste.

Stir fries - A good stir fry ala Australia comes with all sorts of ingredients, particularly a variety of vegetables, and a meat of some sort. Most of the concoctions here are not found anywhere in Asia. We also love using capsicums and celeries in stir fries, which takes over the whole dish, and for restaurants - these are essentially cheap extenders of the dish. The most famous faux-Asian of stir fries are anything that has a satay sauce, a mongolian sauce, a curry sauce.

Battered anything - Very few dishes from SEAsian are actually battered and even when they are battered - it's only ever lightly battered, certainly not the thick layer of flour we find in Australia. There's a place for batter especially when it soaks up delicious sauces. In SEAsia - most battered dishes are served on a stick on street sides, which you dip in a sauce or have in a soup. Quite a different idea to the battered dishes in Australian faux-Asian cuisine.

A lot of more Westernised dishes will be characterised by less use of fish/calamari dishes, less use of fermented bean paste, sweeter tamarind rather than really sour tamarind, less chillies, and definitely the absence of fermented shrimp paste of any kind.  From Penang Hei Ko, to Indonesian and Malaysian Belachan, to Burmese Balachaung, to Vietnamese mắm ruốc. Most faux-Asian dishes are pretty much no shrimp paste zones.
Posted by Shanton at 02:17