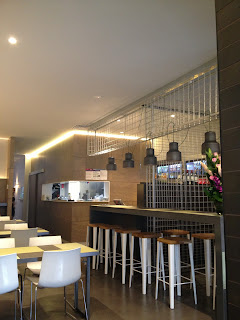 This place is so new than when I first wrote this blog, there was no Urbanspoon entry for it yet. It's a great new setting, and there are clearly teething issues with the service but they have the food down pat. I am looking forward to trying this place again in a few months to see how they have progressed. It's not the cheapest place to eat in town but it's not bad food at all. I hope this licensed place takes off really well.

The Place
Near the corner of Bourke Street and Russell Street, parking is always going to be an issue but if you are in the city, it's really easy to find. I like the contemporary deco and the whole place has a nice feel to it. It might become a student joint eventually but I think it's really aiming at young professionals. It's not a huge restaurant and you are likely to be sitting pretty closely to other diners.
﻿ ﻿
Things to do Nearby: It's 4 minutes from Bourke Street Mall and round the corner from Collins Street. Plenty of shopping around.

The Food
For a first visit, I was quite impressed. Firstly, the food is beautifully presented ala Jamie Oliver - rustic but beautiful. Even with the menu - they really have spared no expense. As for the food, we tried three different dishes:

Gai Yang Ha Dao - Char-grilled chicken with the best tasting spicy hot dipping sauce, this is so yummy that it's going to be difficult to not order this the next time I come just so I can try other dishes.
﻿﻿
Crying Tiger - This was not bad here but a little overdone. Crying Tiger should always be medium rare but ours was closer to medium but it was still tender. Not the best but by no means, average.
﻿ ﻿
Khao Pud Paak - Vegetarian fried rice - this was our nod to vegetables for the night but it was tasty fried rice that brought the sense alive. Really a nice way to start the meal and my only complaint was that it was a bit small in terms of the size - even though we ordered the large serving.

The Service
There're are clearly teething problems with timing, service and attention to detail. They are very friendly which is typical of many Thai restaurants. However, they are not yet very organised and might be understaffed given how new they are. The food did come within the acceptable wait time though they struggled with the one grass jelly drink I ordered.

Overall
I am looking forward to going again in a month or so to track the progress of this place but of course to try new dishes to see how well they compare to other Thai places around Melbourne. I do have a good vibe from this place and hope they do well. It is however, not cheap and I am not going to go every week.

﻿ ﻿
Thailand has the distinction of being the only country in Southeast Asia that has never been colonised by Western powers nor the Japanese or Chinese, evern through the most turbulent wars and colonisation frenzy of the 19th and 20th century. Understandably, this makes the Thai quite proud of their history and their leaders who have managed to avoid the influence and 'shackles' of foreign power by being a buffer zone, playing the powers against each other, giving away beats of land, negotiation and collaboration with agressive conquerors at one point or another.Successive Kings during this time tried to modernise their government in an effort to stave off colonisation and played the English (in Burma) and the French (in Indochina) against each other.

As a result - I think that Thai cuisine has probably the least influence from Europe and actually were the influencers of the cuisines of their close neighbours. For example, Malaysian cuisine is heavily influenced by the Chinese and Melacca has Portuguese influences, Vietnamese cuisine has more than a touch of the French, Burmese cuisine is influenced by Indian dishes through the British Empire bringing large numbers of Indians for settlement, the Indonesians have their rijsttafel  and The Phillipines are influenced by the Spaniards and Americans. Thailand has remained Thai at the very core and it shows arguably the best balance of Thai spices and sauces that is quintessentially based on Southeast Asian herbs and spices. In fact, Thai flavours do influence their close neighbours because at one time - the Siamese Empire reached far into the Malay peninsular, parts of Indochina and Burma. Therefore, it's not unusual that Thai restaurants are so very popular throughout most of Southeast Asia. 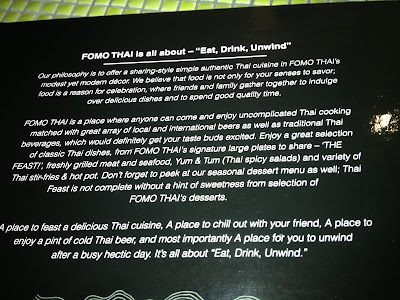