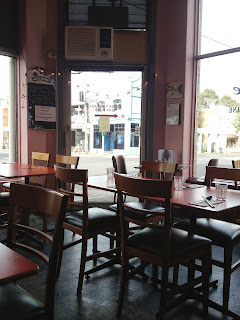 This is a pretty low scorer on Urbanspoon. Granted, it is not off a high number of raters but it's clearly a bit divisive. So, what's the story here? Is it good or not? The punters seem divided and in some ways, so am I.

The Place
This is a basic eating house with not a whole lot of atmosphere. In fact, the most interesting thing is watching the quirky characters and other people crossing the intersection of Johnston Street and Wellington Street. They try to evoke a sense of history by providing snippets on the walls of Singaporean history but it's not presented very well. Basic furnishings with fake plastic plants make up this somewhat dated restaurant.

Things to do nearby: Not a lot around - close to a few pubs in the area or a 5 minute walk up to Smith Street, or 15 minutes to Brunswick Street. 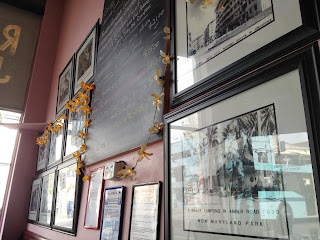 The Food
I have been here many times and I believe that the standout dishes here are the hawker style dishes, including:
Char Kway Teow - is pretty good here and not as greasy as some places. If you like it a bit spicier - say so at the start. For the uninitiated, this dish might be a bit too salty or greasy - but if you are that health conscious - don't order this one. There are 2 different types served here Penang style or 'Racecourse' style. Pick your preferred ingredients and go with it. 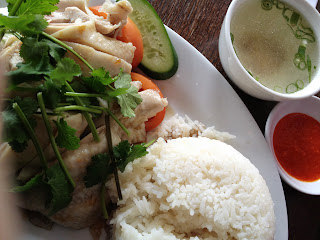 Hainanese Chicken Rice (pictured above) - So, the thing is - like the pavlova for NZ and Australia, Hainanese Chicken Rice is a bit of a contention between Singaporeans and Malaysians, each claiming to have the best versions of the dish. The one served at Raffles Place is not bad as Chicken Rice goes. However, unlike many of the other places (usually Malaysian) in Melbourne that serve this dish, they do not make any attempt to warm up the chicken before serving it up. While this is ok for Singaporean and Malaysian tastebuds - it tends to strike the Aussie tastebud as stange and even unpalatable.

Chye Tow Kway - is really not bad and one of the few places in Melbourne that serves this. It's a sweet dish and preserved turnip - my verdict is that I like it with more turnip, but it's not bad.

Since the demise of Singapore Chom Chom, this is one of the few places in the city that serves Singaporean hawker style food. However, with Killiney Road Cafe opening up everywhere, this place is going to face fierce competition soon I think.

They have names most of their dishes after famous suburbs and eating areas in Singapore - Kallang, People's Park, Jalan Kayu, Toa Payoh, Lorong 29, Bedok etc. These places are indeed famous for some of the dishes that are named in the menu. Of course - you need to know Indonesia is not in Singapore :) , so, maybe don't order the gado gado.

The Service
The service is brusque. There's no other way to say it. It's bad enough to drive a good Singaporean friend of mine (Ed) who is always on the look out for authentic fare to never go here again. Brusque, abrupt and totally informal, some might find it charming - but most diners would be appalled at the "can't be bothered attitude". I liken it to visiting a reclusive and slightly cranky old Uncle who is not very excited about being interrupted.

While the food comes out quickly enough - it struggles to cope when it's busy and some diners will have their food way before others.

Overall
Having said that the food is slightly above average, the service and atmosphere are definitely below average, I still go there primarily because there's not a lot of competition for this cuisine in the vicinity. In addition, the few dishes there that I like - they do really well. So, as I said from the start, I am not sure if I do like this place or not - I will however take friends who want to try Singaporean hawker food there because of those few good dishes, and only when it's not a busy time.

Cultural Moment
Singaporean Cuisine and Malaysian Cuisine - what's the difference? It is really hard to describe even for someone who comes from the region. I have thought about this a lot (throughout many years of living in both countries). I think the best way is to begin by talking about the differences between their common dishes.

Nasi Lemak (Coconut Rice, of Malay origins) - tends to be richer and wetter in Malaysia than Singapore. The chilli sauce in Malaysia is more savoury than the more common sweeter version in Singapore. There are many Chinese hawkers in Singapore who sell Nasi Lemak, and therefore serve them with a range of things that also suit the Chinese palate (including luncheon meat and sausages), while in Malaysia, the Malays have the best Nasi Lemak.

Hainanese Chicken Rice - This is quite a difficult one but I think that Chicken Rice in Singapore is fluffier, less greasy, and less garlic which the Malaysians really just go for it with the garlic and the chicken fat. Either way - this is one of my favourite dishes, but the trick is also in the chilli sauce that's served with it. It has to be the right style of chilli sauce or everything is spoiled.

Roti Canai/Prata - Of South Asian influence - In Singapore, when you order Roti, it's usually Prata while in Malaysia, you would get Canai. What is the difference - I have never really been able to tell. While some argue that the curry they are served with are different - that's a difference in the curry, not the roti itself, right? Maybe it's that Canai tends to have a swirly pattern, while Prata is flatter overall. It's a mystery to me.

Hokkien Mee - In Singapore, this is usually a dish that has two types of noodles (egg and rice), light sauce, pork belly bits, prawns and bean shoots, served with lime and chilli. In Malaysia (particularly Kuala Lumpur), you are looking at a rich dark soy sauce with prawns and fish cakes. Completely different dishes but the same name. Raffles Place serves the Singaporean version.

Overall, I think the dominant cultural groups of the two countries have a very strong influence on the similar dishes of both countries. With the dominant Malay tastebud in Malaysia, I think the food in Malaysia (West Malaysia at least) is always a big spicier, richer, and more favoury. I have heard time and again, Malaysians complaining that Singapore dishes are 'bland' and Singaporeans saying Malaysian dishes are too salty. In addition, the Chinese cuisines of the different regions also have an influence on the two countries. It might be argued that Malaysia is more strongly influenced by the Cantonese (which is commonly spoken in KL), by the Hokkiens (in Penang), while in Singapore, the Teochews preference for a slightly sweeter taste and the other dialect groups- all of which bring their own distinctive preferences in terms of the cuisine. Of course East Malaysia is again different with the influences of other cultural groups.

One last thing - no such thing as Singapore Noodles in Singapore - the closest thing they have in Singapore that's similar is Hong Kong Noodles!