This is a bad review that comes with warnings about the really bad racist service. It's really unfortunate for a place with potential. Attitude kills restaurants. With only 57 votes on Urbanspoon and only 77% likes, this place is still over-rated. Serving up Cantonese cuisine that has the potential to be quite good, it fails to differentiate itself from other similar restaurants close by in a positive manner. For me, it differentiates itself rather negatively. 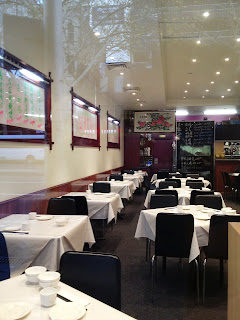 Conveniently located on Russell Street in the city, this is an easily accessible restaurant by public transport. You can see the whole restaurant from the street level -  a basic set up with roundtables with pristine table cloth. There's not a lot of ambience though it is a pleasant enough place for a meal.

Things to do nearby: Set right in the middle of town, there's plenty to do around.

The Food
Serving the usual fare of Cantonese Cuisine - their food is ok thought nothing out of the ordinary. Their seafood is relatively fresh and most of the dishes are comparable to other Cantonese style offerings about town.

The Service
The service is what this review is really about. I dined there with 2 other friends, Robbie and Paula - Robbie being Caucasian and Paula being Eurasian. Our bill came to close to $75.

One of the things I noticed was that their service was a bit abrupt. However, I also noticed that they had brought out small bowls of soup to all the other tables that had exclusively Asian diners (do you know where this is going?). Being a soup lover, I asked "What are those soups and do we have to order them?" The waitress said to wait. She went away and then came back to say "It's $1.50 each!" Wow... every single table and every single person in that restaurant ordered their $1.50 soup except us. We finished our meal about the same time as many of the other tables - all of which got served plates of sliced oranges after their meal - except us. I didn't bother to ask how much the orange was.

I have even been told that they have a secret menu for Cantonese speakers though I do not know how true that is.

Overall
While it is true that the diners here are mostly Chinese, it's also clear that unless if you are with a Chinese dominant group that speaks Cantonese, it might not be an ideal place to dine. The bad service and double standards are completely reminiscent of the experience at C-Culture which was blatantly racist. I won't have a bar of it. So, I am never going back there again and no one I know is allowed to. Why would you when there are plenty of other places nearby which serves food just as good but with at least non-racist policies?

Cultural Moment
So, apparently racism in restaurants is quite a common thing. You just have to google 'racism' and 'restaurants' to see the range of articles and items on this all over the world. This is rather unfortunate - but in a day and age where there is so much competition and social media - hopefully not too many of these get away with their stupidity. Anyway - that's enough... I am looking forward to my next positive review.
Posted by Shanton at 03:38