At 76% likes on Urbanspoon, this place is underrated. However, some of the reviews complaints are around their Thai offerings. I am a firm believer that restaurants shouldn't overstretch themselves in terms of culinary styles. Kotaraya is essentially a Malaysian restaurant, which also has some more common 'Thai' dishes (Malaysian style). Therefore, if you go there and order Thai dishes, I think you have to expect a Malaysian filter - which means it's not going to be the same as going to a Thai restaurant.

The Place
This is a good space for gatherings of 8 - 12 and also for couples. It's well set up (though the deco is so 1980s) and easy to find. There's ample parking around the area. This reminds me of a solid family restaurant with comfortable chairs and lots of space for prams and walking frames.

Things to do nearby: This is near the Elsternwick train station and also shops on Glenthuntly Road, as well as the Classic Cinema (Elsternwick).

The Food
The food is reliable and was award winning in the 90s and early 2000s. The West Malaysian dishes are tried and tested. Ocassionally, some of the dishes that are deepfried might have a bit more oil than current sensibilities. Many of the mains are meant to be shared. I have seen too many groups of people order one dish per person without sharing them - not a good idea here, unless if you are ordering from the noodles/rice section.
Lobak - Minced pork roll, wrapped in beancurd skin (Penang and KL style), served with a sweet plum sauce is not bad here. I prefer mine with less flour in it but that's just the East Malaysian part of me speaking.
Coconut Butter Chicken - not for the severely health conscious, this is a rather tasty dish which you should not have all to yourself, and should be eaten with a serve of steamed rice.

Special mention of the Chinese New Year Rainbow Fish Salad. Thanks for Ed who discovered this years ago, this is one of the few places in Melbourne that does Yee Sang/ Yu Sheng, popular amongst the Chinese (esp the Teochews, though everyone jumps on the bandwagon these days) of Malaysian and Singapore. 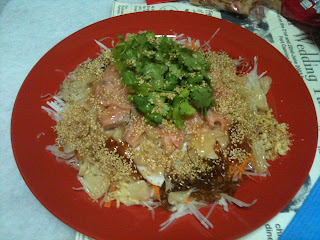 The Service
It's a relatively friendly and efficient place. You get the sense that they go get a regular clientale here and they go out of their way for these regulars. The whole place does have a 'family friendly' feel and the service is generally good too.

Overall
The go to place for Introductory Malaysian Cuisine. Generally reliable and yummy without being crazily expensive. 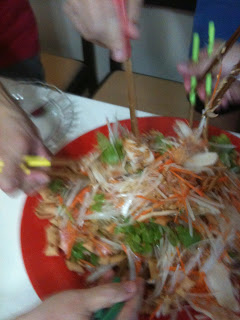 The picture above is one which my Mum and Bro prepared, covered with raw salmon, sesame, 'gold nuggets' which is really like croutons, and cilantro/coriander.
The picture to the left is where we start the Lo hei (Presperity Toss).