http://www.redemperor.com.au/
Quite a low score of 78% on Urbanspoon for a supposed Chinese fine dining institution. I think the main reason is that for an establishment that purports to be a leader in Chinese cuisine, it's pretty average and the service is not quite fine dining either. It's got a great setting and has the trappings of  fine dining restaurant but that's about it.

A caveat here - I have only been there for dinner and therefore, this review does not include the yumcha offering... might have to do that sometime in the future. 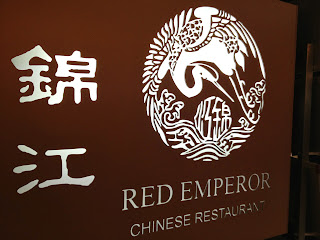 You can't fault the place - it's a great venue and if you are lucky enough to sit on the balcony, it's a pretty good view of the Yarra, Flinders St Station and of the northbank of the city, framed by lovely plane trees. It's well set up with pristine table cloth and is not cramped at all like many other Chinese restaureants. Parking is as expected om Southbank, where you should expect to pay. This is close to Flinders Street Station and all the St Kilda Road Trams.

Things to do nearby: The Arts Precinct, Southbank, and Federation Square are all within 5 minutes walk.

The Food
The food is pretty average which is what makes it somewhat disappointing. Although there are a number of dishes from different regions of China, there is clearly a strong Cantonese influence in this kitchen. The dishes are also someone sweet which is common to cater to more of a Western taste.

The most disappointing dish is the Calamari with Spicy Salt and Pepper, there are plenty of other restaurants who serve much better calamari that are of the same range including Bokchoy Tang and Sharkfin House. At $32, this was really below standard.

This doesn't sound encouraging so far - but it's not all bad - the dishes are ok, just not outstanding or very memorable, but it's certainly not bad food (with the above exception). Perhaps, because I am paying so much more, I am really expecting something really special. However, I can pay the same and get somewhat better dishes (but of a different kind) at Bokchoy Tang, across the river.

The Service
The service is polite but not attentive for the fine dining restaurant. There are also not very communicative and somewhat aloof. For a fine dining restaurtant, I tend to expect a bit more interaction and knowledge about the items on the menu. Non of these were very forthcoming.  They just didn't do anything to make it a special ocassion for diners.

In addition, the wait staff would stand around and have a good old yarn amongst themselves, on the restaurant floor. It is better than average service for the Chinese restaurant but it is not fine dining service, other than the fact that they are all very well presented.

Overall
I am not not enamoured with this place. It would have been nice to have been impressed but I wasn't. Therefore, there is no real draw card for me. However, I might go back to try the yumcha to compare.

Cultural Moment
Ok - I am taking a risk here and this is just my opinion. Westernised Chinese food is not a bad thing. It can be quite tasty. There are some dishes that are particularly prone to westernisation probably because they are more popular amongst non-Chinese diners and are more similar to European dishes. In addition, Cantonese dishes are the ones most prone to this treatment simply because they are usually what the non-Chinese diner thinks about when they want "Chinese" - it's the same everywhere and this is partly due to the immigration of the Cantonese and their cuisine to all parts of the world in the 19th Century, more so than the Chinese from other regions. Therefore, Cantonese cuisine has spent the longest time overseas.  Here are some dishes that fall into this category;

Sang Choy Bow - really not very common in Asia but served everywhere from the lowest of Chinese restaurants to fine dining places like Red Emperor, in Australia. The sauteed pork/chicken/duck is undeniably Cantonese in style, with not a lot of spice, or heat. It is served with lettuce and seemingly healthier and small enough for an entree. The concept of an entree is not really common in Chinese dining... but when Chinese restaurants in Australia, Europe and North America first opened up and became popular more widely - they had to decide which dishes could be classified as an entree. Sang Choy Bow is an ideal candidate for an entree - together with Spring Rolls and Prawn Toast.

The twin fried 'goodness' of Spring Rolls and Prawn Toast that are popular in Australia are also of Cantonese Origins. There are many different types of spring rolls in China and SEAsia, from deep fried to non-fried, from vegetarian to non-vege and from the tiny ones to ones that could qualify as a meal in their own right. The ones that pass for generic Spring Roll in Australia, tends to be the small ones with lots of vege and definitely deep fried. The Prawn Toast, in my opinion, is probably the most Westernised dish - I mean, it won't even have existed if China had not met Europe. So, think about it... bread toast (triangular shaped)... the Chinese do not eat loaves of bread - at least not till Western cuisine was introduced to China - their 'bread' consisted of 'Bao' before that. Meanwhile, the Cantonese term for Prawn Toast is Ha To Si - Ha (being prawns), To Si (is actually derived from the word Toast - indeed a Chinese pronunciation of Toast). When introduced to Japan - this dish is now called Hatoshi.

Beef and Blackbean is a popular dish too in Australia but the blackbean sauce that is popular here is probably the most tame and least spiced of the full range of 'douchi'/'daocheo'/'daocheong'  (Mandarian/Hokkien/Cantonese). Fermented beans in their various incarnations bring all sorts of different flavourings, from the subtle to the punchier pungent ones. The tame 'Blackbean' sauce that's highly popular is almost a drop in the ocean of douchi sauces. But it's still tasty :)

Probably - the most 'westernised' thing about Chinese cuisine in Australia is the treatment of the humble chicken. Chicken dishes in many parts of China and SEAsia are still served bones on, because it is truly believed that that way - the chicken tastes better and the juices are still mingled in with the sauces. In most Chinese restaurants in Australia - we tend to get either bits of the thight or the chicken breast with no bones.
Posted by Shanton at 19:20