Scoring about 7.4 on eatability, and 77% likes on Urbanspoon, you can tell this is more hit than miss. I tend to agree. It is classic West Malaysian food, with the expected usual fare of Nasi Lemak, Roti, various Curries (Kari), Chicken Rice, Char Ho Fun (Fried Flat Rice Noodles with Egg Sauce), Satay etc. 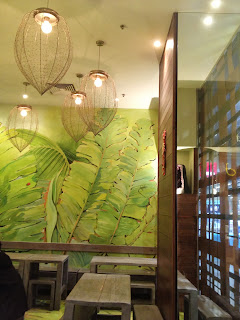 It's situated in a little shop in the middle of a revamped arcade in Melbourne (connecting Little Bourke to Bourke Streets). One of the issues here is size. You could almost get to know your neighbours within the 30 - 40 minutes you are there (particularly if you are sitting next to loud talkers). They like to squeeze people in and put solo strangers at the same table, or sometimes, get couples who don't know each other to go on a surprise double date. That all has to do with the size of the place, so, don't plan a romantic dinner. It is however, great for a quick lunch or an early dinner after work before heading home.

Don't expect comfortable cushions and chairs, this place is designed for a quick great meal. I do like the mural, which as any of you have been to the real Jalan Alor in Kuala Lumpur would know, has nothing to do with Jalan Alor. It's just to add a bit of pleasant green leaves to the mix.

Other things to do close by: JB Hifi, Bubble Tea, Dragonboat Palace, and that shop that sells pork jerky and Chinese preserved plums and goodies.

The Food
Like many of the reviewers on Eatability and Urbanspoon, I would agree that this is one of the better Malaysian places in Melbourne (but not the best). Highlights for me include their:
Hainanese Chicken Rice (served quirkily with 3 ice-cream scoops of rice - which I believe is meant to evoke the Malaccan style of balls of rice), served with warm chicken broth and arguably the best chicken rice chilli sauce in Melbourne,
Kari (Curries of various kinds) which is quite rich and uses curry leaves quite liberally, if you like that flavour, their roti is nice too,
Lemon water (nicer than it sounds) which is really refreshing in summer - have it cold,
Those are my 3 favourite things, which is not to say I don't like the rest. There's plenty to like.

The Service
Very courteous service but usually aimed at getting you in, comfortable and out again as soon as you are done. It is what it is, and for a restaurant of its kind, has relatively good service, all things considering. They never fail to make an effort (other than a request to spread out - see my comments above about space).

Overall
It is the place I go to if I want a quick reliable meal with no fuss, under $15 including a non-alcoholic drink.

A Cultural Moment
Hainanese Chicken Rice is named for the original immigrants from Hainan Island in China in the 19th Century, to Southeast Asia. These immigrants started selling a basic Chicken Rice which includes a few key components; rice cooked in chicken broth, ginger, garlic and pandan; steam or poached chicken at room temperature, dowsed in light soy, chicken broth and specially made chilli sauce, which is combination of chopped chillies, vinegar, ginger, chicken broth. Singapore has claimed it as a National Dish. Malaysians love it too and it's not actually sold in Hainan as far as I know.

Kari is the Malay word for Curry.

Jalan Alor in Kuala Lumpur is well known for its eating stalls espcially at night. A wide range of choices and just round the corner from Bintang Walk (Starhill Shopping Area). 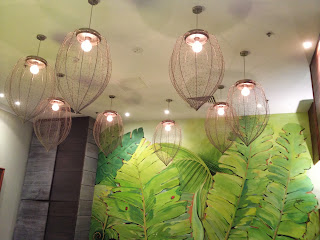