I have had a lot of Vietnamese phở in my time around Melbourne, Singapore and Vietnam. Pho Dzung in Richmond is very much near the apex in terms of taste. Scoring 88% on Urbanspoon means that they are pretty consistent too - the ocassional slips ups, I believe, occur when they get crowded, the soup becomes less steaming hot, and the waitstaff are a bit flustered.

There are a number of different branches of Pho Dzung around Melbourne but the one in Richmond is the best. This review is only about the Richmond branch. This place has a lot of competition along a busy restaurant/cafe street but still does well. In particular, it attracts a huge Vietnamese clientale.

The Place
Set on Victoria Street, Richmond, it can be a hassle to park but usually, you will be able to find something off Victoria Street (or just take the tram in). It's a basic Vietnamese Eating House with mirrors on both walls, making the place look bigger than it is and allowing you to ocassionally catch your own reflection munching away. When it gets really crazy busy, they will open up their second level upstairs and if you are lucky, you might get to sit on the balcony.

Other things to do nearby: Victoria Street Asian groceriesand Victoria Gardens is about 5 blocks up.

The Food
The menu is what you see on the board (in the shape of a pot) on the wall. Mainly, one goes to Pho Dzung for the phở or broken rice or spring rolls. That's about all they serve anyway. Basically, I go there for just the noodle soup - once really does not need anything else - when one sees the size of the bowls.

The options for the noodles are between different cuts of chicken or beef PLUS all the various gizzards, innards and yes - they use the word pizzle! Whatever combination you pick, you get a healthy serve of tasty soup, with a healthy amount of basil and bean shoots on the side to add as you like. My favourite is the Special Beef Combination, that has beef brisket, sliced beef, tendon, beef (with black pepper) sausage, beef balls (not what you think - this is actually made from beef pounded to smitherins and with flour added), with a few generous squeezes of lemon for I like tangy phở, and a bit of chilli.

This is truly good soup and one of the few places where I don't feel immensely thirsty an hour after my meal. This means that it's not as salty as some other places and maybe there's a lot less MSG. I'd like to think there's no MSG - but I am sure there's some. I will ask the next time I am there for the sake of the blog entry :). I hope I don't get barred from the restaurant!

The Service
The service is polite and quick. They are there to facilitate you getting your food - no real prolonged conversations should be expected because they don't even have to bring you a menu. No complaints so far, they usually get the orders right.

At the end of the meal, you just walk up to the counter, tell them which table you were sitting at and pay. Simple.

Overall
Probably the best Vietnamese Noodles east of Melbourne - If I lived closer - I'd probably be there at least once a week. I like - very much.

Cultural Moment
Phở is really quite a healthy dish and was popularised in Australia when the Vietnamese came to south after the years of conflict in Vietnam (to put it mildly). Most of them came from south Vietnam (Saigon/Ho Chi Minh City) where I have found the phở  AND the food generally to be a bit sweeter than similar dishes in the north. A local once told me that this was because since the 1920s, there were always more foreigners/westerners in the south, who prefered their food a bit sweeter - hence, tastebuds have changed over the decades. In the north, I find that  phở is somewhat 'earthier' and more herbal, than the south.


In addition, a differentiation between  phở in Vietnam and Melbourne is the use of lime versus lemon. Lime is a lot more subtle - while lemon really packs a punch. While I like both, dependi.ng on my mood - I do like my food quite tangy, so tend to go for the lemon of Melbourne. The following picture was my first ever phở in Hanoi... notice the noodles are softer than the south...and a lot more greens 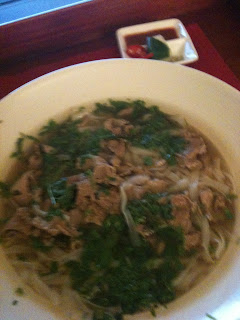