Reviewing both places at once as a comparison because it's worth doing so. The Urbanspoon ratings are starkly different, with 82% (thousands of votes) for the city branch and only 69% for the South Yarra branch (with less than 700 votes). One wonders if this has anything to do with the clientale each of these places attracts, or the positive reviews from Matt Preston a fews back for the city branch, or the actualy experience. I suspect it's a combination of all of the above.

The Place
The city branch (pictured below) which is usually crowded goes up 3 storeys. It's a great set up and by and large, the coordination across the floors work quite well. I like the atmosphere which can get noisy some times and you do sit quite closely to neighbouring diners. CBD Parking can be a challenge. 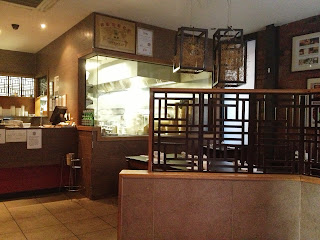 The South Yarra branch is set out in a more 'western' layout, the furniture and deco also reflect a more contemporary feel. There are also private dining rooms up the back. Parking is much easier here where Safeways and Coles are.

Things to do nearby: Lots of things to do in both places, if the shops are opened.

The Food
Both places have identical menus. However, the quality varies slightly between the two places. I believe that the city one is slightly better than the South Yarra branch, but both are still of relatively high standard. The clear winner for both these restaurants is their Xiaolong Bao (Juicy Shanghainese Dumpling) - likely the best Xialong Bao in Melbourne - big call right? But I stand by it for now. Best way to have these, the traditional way, is to have a little bit of ginger and some vinegar with it.

The other good dishes here include;
Dong Bo Rou (Red Braised Pork Belly) - I think if Caroline and I could have these without any health or weight consequences, we would order take away from here at least once a week. But since we can't do that, I can only say - for Pork Belly connoiseurs, this is pretty good. This is an expensive dish here but it's yummmmmy.

Suan La Tang (Hot and Sour Soup) - This is a favourite dish of mine and most places in Melbourne do not do this well. Most Cantonese places do an atrocious job of it. At Hutong, this dish can be inconsistent - I suspect it depends on the chef of the day. So, at worse, it's more sweet than sour, at best - it is really good Hot and Sour Soup with mushrooms, beancurd, shredded meat and peas dowsed in vinegar and chilli.

Won Ton in Hot Chilli Sauce - I really like these because the wontons are tasty but it's not for those who don't like the hot chilli oil (either because of the chilli or for how oily it is). :)

String Beans with Minced Pork - This is their version of 'crack beans" and even I (who do not like string beans) would venture to pick at the minced pork and it's pretty good.

Red Bean Pancake (for dessert) - As I said in the Bok Choy Tang review under the Cultural moment, this is one of the very few Asian desserts that I like. HuTong serves this up with a twist - it comes with ice-cream. Sometimes, this is great, but other times, I just one the good old traditional way by itself. The unfortunate thing is that with HuTong, this can sometimes be a bit inconsistent. There was that one time they brought the pancake to the table and it might as well have been swimming in oil - not good.

There are two dishes that have been real disappointing here (both ordered at the CBD branch);
Dan Dan Noodle - which is really plain and there's simply not enough sauce both times I have ordered this. It's like spaghetti you know (this is like Chinese spaghetti) - if there's not enough sauce - all you get is stodgy pasta, if there's too much sauce - it's overwhelming. In my opinion, HuTong hasn't got the balance right with their Dan Dan noodle - so it's disappointing.

Salt and Spicy Calamari - Don't bother to have this here. It's actually surprising that a restaurant of this quality is not able to get this favourist Aussie Chinese dish right. It is inconsitently mediocre to bad.

The Service
The service is variable but I actually believe that South Yarra does a better job with their service, possibly because of the layout of the restaurant. It's easier to cover up the bad service of the grumpy and clueless wait person, if a more experienced and friendly wait person can see what's going on.

With the CBD layout, you have a separate crew for each level of the restaurant - so if you have a grumpy crew with a disorganised and less experienced supervisor - there's no cover up.

I have to say that during the first 6 months of operation, I went there a few times and the service was impeccable. Since the Matt Preston review and the influx of lots of people, the service has never been the same. The attitude is inconsistent and the greeters are more "people pushers" rather than making you feel welcomed (in the CBD branch). The service (with an occasional lapse) is better at South Yarra.

Overall
Yes, it's more expensive that your regular Shanghai dumpling joint. However, I do not go to a restaurant such as this for just the dumpling -  I want a place where I can hear the conversation with my friends, where I can sit around and relax a bit longer than the "eat and go" place, better service than your average brusque attitude, and ambience - not just the food. Of course, I still expect the food to be better than average, and also expect to pay more. Therefore, I do not compare this to a regular Shanghai Dumpling place - I compare it to what I expect of a restaurant of its standing, and it comes out relatively well.

Cultural Moment
HuTongs refer to the style of housing particularly in Beijing, where clusters of houses are organised in a square, surrounding a main courtyard. There is a pretty excellent article about hutongs on wikipedia, if you are interested in the history.

Having visited one myself - one of the fascinating things about these housing arrangements in the past is that you could tell which family lives where and what their main occupations were just by looking at the designated sculptures situated at the front doors. This is a very old practice.

Another interesting fact alludes to the patriarchal Chinese society. A wealthier family usually has a private courtyard, with 4 buildings surrounding the courtyard housing the extended family. Firstly, entry to the courtyard and 'house' is usually via the south into the courtyard and facing the northern building. The northern building which receives the most welcome light and is usually built on a higher level (or is slightly elevated) is the main living area, where highly honoured guests are received, and where the patriach sleeps. Older Sons and their families reside in the western building (morning sun) and younger sons in the eastern building (setting sun). If there are no younger sons, unmarried daughters live in the eastern building. If there are younger sons living in the eastern building, unmarried daughters are relegated to the back building (behind the main north building) - good luck getting good sunlight there. Servants live in the southern building and the reception hall is here too. There's actually quite a bit of privacy for each branch of the family with their own quarters and buildings.
Posted by Shanton at 21:49