Given its location, this could easily have become a student hangout (nothing wrong with that) but the pricing puts it just above your average student joint. Instead it is a contemporary restaurant that's affordable for all while still maintaining relatively high standards of food and service. With 85% on Urbanspoon from over 1000 raters, this looks like a pretty good bet on several levels. Time to acknowledge my inferior chopstick skills and go for it once again.

The Place
This has great understated contemporary oriental deco and doesn't feel cramped like some other places. They still fit a lot of people in but somehow maintains a feeling of ample space (probably because of the higher ceiling). The noise level is always bearable despite the size of the restaurant. It's not a great place for children though and parking is pretty much your Melbourne Central high cost car park. The risk with many Korean places that offer the BBQ option is that you come out smelling like one of the marinaded meats. It's not so bad here at Oriental Spoon - though it is nearly impossible to go unscathed - the ventilation here actually works rather well and by and large, you tend to come out with only a hint of the BBQ aroma. So, overall, a rather pleasant place.
Things to do Nearby: Literally across from the revitalised Melbourne Central and the State Library is not far away.

The Food
I have been here for lunch for the Bibimbap (traditional Mixed Rice offering on Stone Bowls), Bulgogi (Sweet Marinaded Beef on a Hot Plate) and even Bento boxes. However, dinner is the real treat here. This time round, we went for the Combination BBQ and the Mixed Dumplings Casserole (Hot Pot). 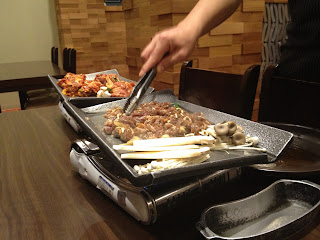 The Combination BBQ includes beef, spicy pork and chicken, and mushrooms, which they cook to the side table (as pictured above), so that the smoke is not in your face. It is rather tasty though it does lack the punch of some of the places around town. Don't get me wrong, it's really quite good but it's just not as spicy as some of the places around if you are into spice. I did however, find the beef rather a tad sweet. As a person who tends toward the savoury, I preferred the chicken and the pork in this instance. 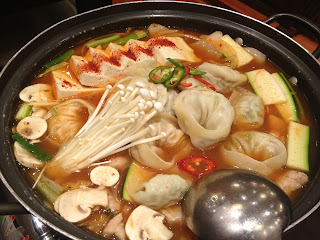 The Mixed Dumplings Casserole (pictured above) comes with hidden gems of small bits of pork belly and rice cakes. So yummy and the spice here is as hot as you want it to be. This is tasty without MSG inducing thirst and great with a serve of rice. Great for the coming winter months. 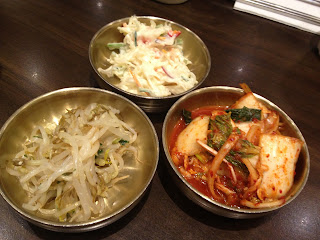 The one thing that was slightly disappointing is that for a cuisine that is so well known for the thousands of condiments, they only offered up three on the night, though, they were very happy to refill it when needed.

From the booking over the phone, to the welcome at the door, to the serving of the food, the service here was really friendly and generally attentive. This place seems to be run by exclusively young Korean staff who know they menu inside out. They do pay attention to their customers' needs, which is great. As an example, we were seated a bit further away from the main crowd, and the waiter actually indicated with a smile that while we are 'far away' we will not be forgotten -however, if we did want immediate attention, to please raise our hands and he'll come to us immediately. That was nice. And we never felt neglected. The service was friendly and non-intrusive - one of the best in the city.

Overall
Overall, I think this is a good place for introduction to Korean cuisine for newbies because it has a good range of food and a great vibe. One thing I really noticed as I was walking out was that there were so many smiles amongst the diners. You can tell when people are happy and enjoying their food. This place really had a great buzz and the wait staff run effortlessly amongst diners with no fuss.

Cultural Moment
Service across the world is vastly different and people have very different expectations of what good service. Most of the time, this is culture dependent. In places where tips are the norm, wait staff almost want to prove they are you best friends and will sometimes be quite intrusive, especially if you are not the kind to chat with strangers. In Hong Kong, unless you speak Cantonese and know the maître d, you are almost an inconvenience that just has to be served to get you out of the way. In Japan, it's as if you have arrived at a friend's house and they will try to do their best to see to your needs (some might find this too much). In Malaysia and Singapore, good service is defined by basic courtesy but then being left alone until called. In New Zealand, good service is a chat amongst friends and a natural interest and curiosity.

This brings us to Australia, what is good service here? Anyone who uses reviews on Urbanspoon can get a sense that there's a multitude of expectations but the biggest complaints seem to centre around perceived rudeness and lack of engagement. In Australia, we seem to want a bit of banter (not too much or it would be considered intrusive) and and genuine interest in the customer. Unfortunately, you don't always get this even from the so called 'fine dining' spots. In particular, with Asian restaurants, some of them bring their own cultural standards without seeing the needs of Australian diners - most unfortunate. Others just struggle with English and therefore lack the ability or confidence to engage in casual Aussie banter, yet many diners expect this even at Asian restaurants. Should they expect this? I think they have the right to, with a bit of leeway for room to grow... what I like to see is an effort made to engage rather than hiding behind the order pad. I don't think that's too much to ask, but maybe I have been here too long.
Posted by Shanton at 05:35