The name of this joint belies its very basic set up and non-pretentious food. It's a very simple eating space across two levels and in an area where there's not a lot of competition offering this style of cuisine, it continues to do quite well. Dare I say if this was in the CBD or Springvale or Box Hill area, it might not do as well? Don't get me wrong - this is not a bad place to dine at all - but it's certainly not 'gourmet dumplings'. 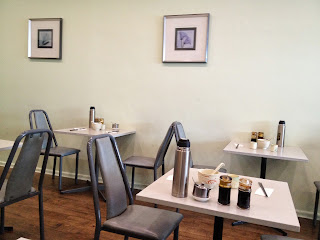 This two level space has had minimal investment in terms of creating some sort of an ambience, or even rudimentary deco. In fact, the framed contemporary Chinese artworks hanging on the walls have been kept in the shrink wrap plastic they probably came in originally. It's not an especially clean space and the tables are quite close to each other. The upper level is an even more basic open space with not even the aformentioned artworks. So, don't expect anything flash now.

Parking can be difficult depending on time of day.

Things to do Nearby: The shops of Glenferrie Road, Malvern mostly. 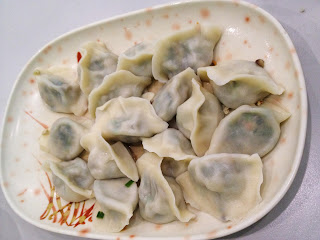 The food is not bad but nothing to rave about. It feels like they do use frozen ingredients in their food and the dumplings are definitely pre-made. The dumplings are the mainstay of the menu and there's a good varietly in soups, steamed, or fried. They are of middling size (I have had bigger and also much smaller). They are relatively tasty though the Vegetarian Dumplings (pictured to the right) are a bit bland. The Fried Chicken and Prawn Dumplings were really nice and juicy, while the Beef Dumplings are also very tasty. 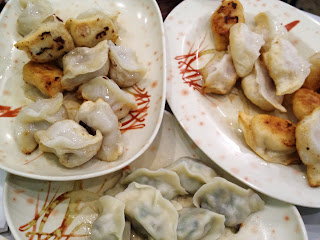 The Special Fried Rice uses northern Chinese ingredients, rather than the Cantonese and Yangzhou ones. However, what is disappointing is that they use a lot of frozen vegetables, and the shrimps aren't the freshest in it. The taste is still ok but not brilliant.

The Hot and Sour Soup is quite tasty if a bit thin, but again, contain the frozen vegetable cubes and shrimp. If you are not fussed about frozen foods in a restaurant, the food is still tasty. What as most disappointing to me were the greens that were very bland.

﻿
﻿The Service
The service is like the rest of the restaurant, rather functional. There's not a lot of banter between the staff and customers, or even between the staff memebrs. Unlike many places where during a quiet time, staff might engage in a bit of light conversation - this was not evident here. They get the job done, it's not rude and not completely offputting

Overall
If in the area, and wanting some dumplings, it's worth trying out. However, I won't be going out of my way to drive here for dumplings as there are many others of higher quality in other areas.

Cultural Moment
As you would likely know, not all Fried Rice are equal. I am just going to focus on the Chinese varieties here in this entry. Of course, there will always be variations depending on who's cooking it and what they like. Over the years, restaurants might also have chefs that will add a bit of this and a bit of that to their fried rice, depending on their influencers. This list is just a general guide.

Yangzhou (Teochew) Fried Rice (most common in Australia and often called 'Special Fried Rice') - The key in this fried rice is the use of diced BBQ Pork (Char Siew), in addition of shrimp, peas, spring onions and eggs, with garlicky goodness. In SEAsia, they sometimes add sweet Chinese sausage to this dish too.

Fujian (Hokkien) Fried Rice - This is vastly different from the more common Special Fried Rice, and consists of a basic Egg fried rice, with garlic, and a good dollop of thick sauce (soy and/oyster sauce base with meat, mushroom, shrimps) poured all over it.

Beijing Fried Rice - This is the most basic of Fried Rice. If you grew up having Special Fried Rice, this might be a bit of a disappointment. It is basice Egg Fried Rice, with fluffy garlicky eggs, and spring onions. This is the dominant style in Beijing.

Cantonese Fried Rice - There are a few varieties here and the Cantonese are most likely to vary the ingredients in their fried rice. The base is always eggs, spring onion, and garlic. Then, they are likely to add one of the following (chicken pieces, sliced beef, crispy pork, or even salted fish on top of the other ingredients).

Moral of the story - always ask what's in the fried rice, don't assume it's what you are used to.