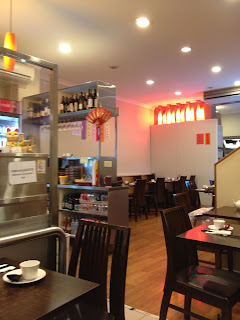 So, I finally have the story. Once upon a time, there was a popular cafe in Richmond called Ming Xuong that was a staple of good Cantonese fare. Then, after many years of success in Richmond, they expanded their operations to a branch on Russell Street. Then, after that brief expansion, they sold both branches to two new separate owners. Therefore, now, the two Minh Xuongs are not related to each other and serve food and dishes of varying quality. I actually think that neither are as good as the original, but the Russell Street Minh Xuong is the better of the two.

The Place
This is a basic Cantonese eatery with just a basic nod to decoration, slightly grimy, and with dodgy ventilation and sound insulation. It's not a big place though there are two levels and perfect for a quick meal. You can ocassionally come out smelling like the food you are eating. Parking is difficult at the best of times in this section of Russell Street unless if you go for paid undercover parking - Mantra Hotel has some of the best parking rates in town.

Things to do Nearby: QV and Chinatown are all around the corner.

The Food
﻿﻿﻿﻿﻿﻿With the demise of A1 and King of Kings, and the bad service of Pacific Seafood BBQ House, there're not that many good Cantonese eateries left in the area. Therefore, it is good that Minh Xuong is in the mix because they do good Siu Laap Cuisine (discussed in another blog entry and repeated in this one in the Cultural Moment section). They do all the traditional Roast Pork, Roast Duck, BBQ Pork and Soy Chicken dishes quite well and this means it's a plus for me. Look at all that meat in the window. They look good, don't they?

They also do a range of noodles, fried (crispy) noodles, and dishes on rice, with the usual Cantonese flare. Their dishes are not bad at all, though, I think they do stint on the vegetables in some of the dishes. They also do the usual Westernised dishes like Lemon Chicken (with a mean yellow sauce), and luminous Sweet and Sour Pork.

The Service
They have relatively good service here and also take time to answer questions. They are also a jolly bunch that seem to continue their banter in Cantonese quite loudly, giving the restaurant a buzz and friendly atmosphere. They pay attention to the customers and are quick to bring a pot of tea as soon as diners sit down.

OverallI would go here for Siu Laap dishes given the relatively friendly service and the tasty dishes. It's quick, it's convenient and it's affordable. Not much to complain about and good for a bit of Siew Yok on the way home from work. Yummy.

I wrote a substantial piece a while back on Hong Kong BBQ Houses which is worth highlighting again. So, this is a repeat of that here for those interested in this cuisine. It also helps you navigate the meats hanging in the window.

Siu Laap cuisine consists of 2 different sub-cuisines - siu mei consisting of the roast dishes and lou mei, the braised and stewed dishes. The most common offerings of a good BBQ house include (Cantonese names are used here);

Char Siew - popularly known in Australia as either BBQ Pork or Honey Glazed Pork. This is the red coated barbequed pork. It's not barbequed as Ausatlians know it - it's actually roasted over an open fire oven. Good Char Siew should still be moist on the inside rather than dried out. Some people like their Char Siew with any trace of fat (using pork loin) - which can make it drier. Others prefer a slightly fatty cut of meat (pork leg). However, at the end of the day, it's also dependent on the marinade. Again some people prefer a sweeter Char Siew while others prefer less sweet but a more subtle savoury taste. Char Siew is eaten on it's own but also used in all sorts of dishes such as fried rice, wonton noodles, bao, and even stir fries and fried noodles.

Siew Yok - Crispy Pork needs little extplanation. This is really roasted pork belly with really crispy skin, with 5-spice flavouring and actually my favourite amongst these dishes. Again, eaten on its own or as part of various dishes such as stir fried with bean curd, or in soups, they add a whole new dimension to these dishes.

Yao Gai - Soya Sauce Poached Chicken which is slightly sweet and mostly savoury. The chicken should still be very moist on the inside even after being hung out to dry literally in the windows of these BBQ Houses. Steeping the Chicken in the soy sauce rather than boiling it to death is the trick to good poached chicken. Also great in noodle soups.

Baaht Chit Gai - White cut chicken, cooked and steeped in stock. Kylie Chan has a great recipe for this and some places calls this Hainan Chicken. It's a basic dish and served with ginger and shallot sauce and/or chilli sauce.

Siew Ngap - Roast Duck (NOT Peking Duck) is a tricky dish because ducks are a tricky business. Unlike chickens which are usually succulent and full of meat, ducks refuse to be as consistent and can be quite lean. So, sometimes, roast ducks can be very boney and other than the breast meat, there's not a lot of meat. However, as I understand it, enjoying roast duck is also about sucking on the flavour ridden greasy bones and licking your fingers.

Mak Jyoo - is that orange looking cuttle fish / squid that some places have. Served sliced up and with black soy sauce. It's a bit tasteless to me but some people like it.
There are a few other dishes worth mentioning here. One that not many Europeans are likely to order amongst these offerings is the laap cheong - Homemade Chinese Sausage. Less common in Hong Kong but you might see it in Melboure are bbq pork ribs as well. On some special festival days, some places might also have roast suckling pig which is very expensive. A dish you would not usually see outside of Hong Kong is siew ngoh which is roast goose.