This place has had mixed reviews over the years primarily centred on their variable friendliness and service level. In addition the standard of the food is also variable at times though it has improved over the years. Finally, they must be doing something right with the crowd they attract. Yet, they have a relatively low Urbanspoon Score. What is going on here?

The Place
This is a pokey place. Both the 'mothership' and the little offshoot 3 doors down are small and pokey. They try to fit in a lot of people into the space and it's really not designed for a leisurely meal. It's really an "Eat and Go" place. As a result, cleanliness is hard to maintain though they do try their best. Also, it can get noisy in the main restaurant. So, this is also not a child friendly place and parking requires a hedging of bets around Franklin Street.
Things to do Nearby: This is about halfway between Melbourne Central and Queen Victoria Market. Also close to the State Library.

The Food
This is a West Malaysian restaurant with authentic West Malaysian Chinese tastes. The food comes out really quickly which means that it is never steamy hot enough for me. However, there are 3 main things that are worth trying here;

Hainanese Chicken Rice - the rice itself is nothing to rave about but very passable. However, the chicken here is pretty good and they also have roast chicken (which they call BBQ chicken). That's a plus in my books to have both options. The accompaniment chilli sauce is ok too, though the soup is never warm enough.

Curry Laksa - so, while I am not a huge fan of curry laksa, the one here is not bad afterall, but I usually have the chicken laksa, not the seafood laksa. The soup though, is pretty tasty and rich enough for my liking without being sickening. By the way - you can order extra noodles with your laksa, though all the servings are pretty big as it is. 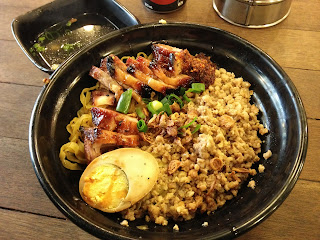 Mee Pok (pictured right)- this is one of the few places in the CBD that offers Mee Pok - which is SEAsian thin 'fettuccine' - it's a flatter egg noodle. They serve the Mee Pok here with either a curry or soy base. The texture of the noodles is what you would expect of the West Malaysian / Singaporean mee pok. The soy base mee pok here with either BBQ Pork, or minced pork or combination of both, tend to be sweeter than what I like. However, it's what they do in Kuala Lumpur. They like it sweet generally.

The Service
This is variable, depending on who you get on the day. Over the years, they have actually improved (believe it or not?). They also have to coordinate between Coconut Hourse and Little Coconut House because there's essentially one kitchen. They transfer the food across in a very hygenic way within bainmarie containers. They have a good system of getting the food out really quickly, which of course means that there is probably of pre-cooked food that's never steamy hot enough. Most of the time, the wait staff are pretty friendly these days.

Overall
I'd go there ocassionally when I want Chicken Rice and I am in the area. With the major competitors here being the iconic Rose Garden and the newcomer Kitchen Inn, it would be hard to survive if they weren't any good (Just ask the former owners of the cafe that used to occupy the Kitchen Inn space). However, they continue to attract a healthy number of students and people working in the area. So, they seem to be holding their own. Therefore, despite a relatively low Urbanspoon score, it's far from a disaster, it's really a matter of whether the style of food appeals to you, now that the service has improved.

Cultural Moment
Slurping Noodles is something you are likely to hear at Coconut House, from international student diners sitting very close to you. In Australia, one doesn't slurp noodles - it attracts attention of other diners and can be quite annoying to down right rude.

So, where do people slurp their noodles loudly?
In China, Korea and Japan, slurping noodles is perfectly acceptable and is a sign that you are enjoying the food, and complementing the chef. It also cools the noodles as you are eating them. There are some minor differences in techniques though - some Chinese tend to scoop it in rather than slurp it (though, just as noisily). All generations continue to do this today. However, not everyone does it - all I am saying is that, it is acceptable.

The question then is, should a young Chinese man in Melbourne be slurping his noodles loudly? Is this a case of 'when in Rome' or 'people should be comfortable with their culture'? What do you think?