https://www.facebook.com/groups/289877955326/10151402035600327/?notif_t=like
Norsiah's Kitchen started out more than a decade ago on Chapel Street as a restaurant but this is a true home cooking family run restaurant that struggled to keep up with the speed and sleek operations of that area. You used to have to call ahead to order if you wanted to eat in a timely manner. Then, they moved to Swanston Street in Carlton, and transformed itself into a fastfood cafe. This has worked wonders for them, serving mainly from the bain-marie, with the option for ala carte dishes too. This is basically student haven with its large portions and very affordable prices.

The Place
This is a small space with a cafeteria style setting that is very informal and basic. There are some tables outside as well. All the tables and chairs are moveable to suit different numbers of diners eating together, but remember, this is a small cafe - so don't go crazy with large groups. There is parking round the side on Pelham Street.

Things to do Nearby: Lygon Street is not too far away and Melbourne Central is a good 15 minute walk. 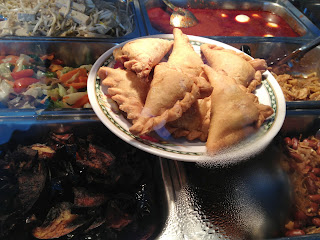 Basic Halal Singaporean Malay home cooking. This is good for a quick meal and they do serve a basic range of dishes that are not pretentious, traditional, and not necessarily inspiring.  Some people would prefer more intense and richer dishes. They don't do that here and all the tastes here are pretty uncomplicated. You either like that style of food or you don't. Some of the highlights here include their Fried Chicken and Tahu Telur - that is of Indonesian origin, essentially a dish that has yummy beancurd deep fried in eggs, with peanut sauce and shrimp paste. Personally, I tend to find their style of curry too soupy, whereas I tend to prefer dryer curries.

The Service
The service here is always friendly, welcoming, and informal. It's almost like visiting a friend's cafe and you do feel that way. This is a great plus for the cafe.

Overall
This is a place I go to when I want a really quick meal with no fuss.

Cultural Moment
So, is there a difference between Malaysian Malay and Singaporean Malay cuisine? Essentially, the answer is no, though regional variation can occur because of slightly different tastes and preferences. The range of dishes and style of cooking are essentially the same. However, regional variations are due to different combinations of spices in quantity and balance, and also dependent on how much influence there is from sister cuisines in the area. For example, it is arguable that Northern Malaysian Malay cuisine have Thai influences, while East Coast Malaysian Malay cuisine is characterised by their access to seafood, and seafood products such as sauces and condiments. On the other hand, some would argue that Malay cuisine in Singapore has stronger Chinese influences.

Dare I say that the Malay dishes in Singapore are less spicy and intense compared to the West Malaysian cousins? I am not sure but it does feel that way. This is not to say that they have less chillies, just that it's not as rich or heavy handed in the spices used. Of course, I can easily be challenged in that opinion and hope to continue this research through actual food tasting action research ... ah! What a wonderful World!
Posted by Shanton at 04:11