This is a no fuss fast food joint with a range of Chinese and Southeast Asian dishes. It is best good for a quick lunch if you are very hungry as they serve big portions. It's a basic eatery that caters mostly to students at the University. This space has seen a few incarnations since it was opened (including China Bar at one stage) - this latest offering has chefs with stronger Northern Chinese influences (rather than Southeast Asian or Cantonese).

The Place
This is actually on Grattan Street though the building has a Swanston Street address. It's a basic eating space with rows of tables in and outside. The ventilation is ocassionally bad enough that you come out smelling very much like the food they serve, especially when it gets busy. It's a bustling eating space around lunch time with many students and some staff. Expect to have someone knock into you at some point of your meal especially if you are sitting a bit far out from the table. I am never sure about sitting outside by Grattan Street with the traffic just zooming by (would you like dust with your meal?). None of these have stopped the large numbers of students who dine here. There is no parking to speak of here.

Things to do Nearby: Lygon Street is not too far off.

The Food
This is basic hawker fare aimed at a hungry crowd of students. I am just going to state it up front, if you are really into healthy food, this is not the place for you. It's not really high quality food but there's a lot of it, it's very down to earth, and has a real punch (they don't hold back with flavouring). The dishes do tend to be a bit more oily and the cuts of meat also have fat in them. In addition, the food comes out pretty quickly in order to get the students back to classes...

Some of the highlights here for me include:
Salted Fish and Chicken Fried Rice - (I do ask for less oil) The are generous with the salted fish and it's always quite tasty. However, there's a lot of it and it gets boring after 10 mouthfuls... sometimes, I pack it to have later... but beware of leaking oil... yes, salted fish oil is never good in the manbag.


Szechuan Style Chicken and Beancurd Rice - Again with the oil but this is spicy, sweet, savoury and yummy but it's harder to hold back on the oil. Anyone who's had Szechuan style dishes would know that chilli oil is usually part of the deal. You either like it or not. This is generally a nice dish but the chicken can be fatty too. 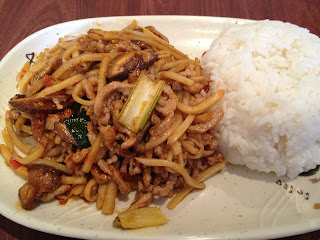 Black Fungus, Shredded Pork and Egg on Rice - Very easily my favourite dish here, with a healthy dose of fibre and protein with a heap of carbs. It is tasty and non-spicy, and for me, the textures of this dish is what sets it apart from all the other dishes here.


Shredded Pork and Fragrant Fish Sauce on Rice (pic to the right) - This is a classic Szechuan dish that's very popular in the region. The one here is a bit more vinegary (just how I like it) but again, it's greasy. If you like bamboo shoots and black mushrooms in a garlicy sauce, this is it. It's a huge serve as you can see.

The other dishes are ok and they do have a wide range of dishes including Southeast Asian dishes like Char Kway Teow and Hainanese Chicken Rice, but just note that they are cooked by Chinese Chefs, so it's not as authentic as you might expect.

The Service
The service is pretty basic like all such places. They are never rude and the food is usually served very quickly. As far as a fast food joint goes, this is pretty good. However, it does get busy and very harried at times, so don't expect too much.

Overall
I'd go there for lunch when I want a quick meal and can cope with the level of oil. It's not the place for a lunch meeting though, just a quick meal or a takeaway.

Cultural Moment
It is commonly suggested that you need to look at the clientale of restaurants to know the target audience of the restaurant. The clientale at China Style is mosly mainland Chinese students, most times I have been there. What I find really fascinating is the collectivistic/communal dining that I often observe here. Although most of the offerings here are individual dishes, it is totally not unusual to see the students eat off each other's plates.

The food here is very similar to some of the more basic eateries in Shanghai and the Szechuan regions. The flavours are strong and they don't hold back on the grease either. Obviously, this resonates with the Chinese students and they keep coming back. I have just one question... how do they have all that grease and still manage to be half my size? Both the men and women!!
Posted by Shanton at 03:35