Dumplings in Carlton to add to the increasing number of Asian restaurants in the area. Melbourne has been exposed to Chinese Dumpling culture for a while. More importantly, Melbourne is used to the iconic Tattersall Lane shops which are ridiculously cheap. And then, Hu Tong Dumpling comes along, and Matt Preston highlights the delights of Chinese Dumplings, and then suddenly it's not only cool to have these dumplings, it's also classy. So, what's Dumpling Den like? 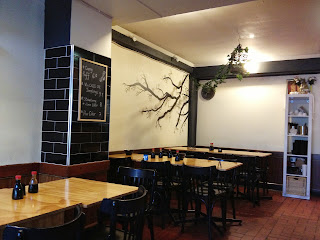 This is a rather pleasant dining space with contemporary deco. It is usually relatively cleaner than the average dumpling place in Chinatown. The tables are close to each other and it's not a huge space, so it does get a bit cramped sometimes. The few times I have been there, they seem to have a penchant for playing power ballads in the background in the evenings. It's not a particularly child-friendly place because of the set up, and parking is difficult around the area, though you might get lucky around Cardigan Street.

Thing to do Nearby: Really round the corner from Lygon Street and a 10 minute walk to the Melbourne Museum and IMAX. 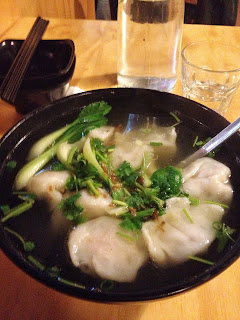 The menu here is a lot more limited than the usual dumpling places these days in Melbourne. There's probably about a quarter of the offerings you might see in many other dumpling houses.

The food is not bad as dumplings go. The servings are very generous, particularly the soups. The dumplings are actually bigger than some of the ones in the CBD area. They also taste slighly sweeter than the ones I am used to. the higlight for me is the Dumpling Soup  (pictured right) because of the really nice soup that's not too salty. I had the soup without noodles because the skin of the dumpling was enough carbs for me. You can see that they also throw in some fresh herbs like cilantro and fresh shallots to add fragrance to the soup. 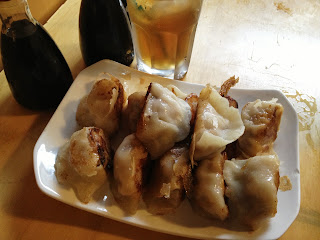 The Fried Pork Dumplings (pictured to the right) are also quite nice, but the skin is quite thick and they are not as juicy as some of the places in the CBD. Unlike the soup dumplings, the steaming/poaching process followed by the frying dries out the juiciness a little bit.

The Service
The service is ok and friendly if a bit distracted ocassionally. They tend to leave diners alone and there is not a whole lot of interaction generally.

Overall
This is not a bad place for dumplings if you are happy to pay Carlton prices for offerings which you can get at a slightly cheaper price in Chinatown or Box Hill. The quality is there, though some would complain about the thicker skin.

Cultural Moment
A few years ago, I was in Harbin in China. Harbin is the capital of the Heilongjiang Province - which is the most northern-easterly region of China. To them, every else in China is considered "South China". This is where the trans-Siberian railways become the China Far Eastern Railway. Culturally, it has had a history of influences from the Russians and the Jews, and the architecture of the city makes it look like more of a European city, rather than a Chinese one. It has been called 'Oriental Moscow' and I was really fascinated by the city. So, even the food has some Russian influence here and there, including some sort of a 'Chinese Salami'. The beauty of being hosted so generously by Chinese colleagues is that they completely take the dining decisions out of your hands, to show you around and get you to try a full range of dishes. It can also be a challenge...

What does this have to do with this blog entry? Well... it was also the first (and last) time I had Donkey Meat Dumpling. I didn't really know what it was until I had bit into it. Interesting but not my thing really. There's a certain gamey and smokey taste to them - I say them because I decided to have 2 - to confirm the taste. So, clearly, there's a whole range of dumplings we might not even be aware of out there.
Posted by Shanton at 00:10