In most Western cities of the world, the best yumcha would often be found around the Chinatown area. In Melbourne, it's a bit different because the city is peppered with good yumcha offerings from west to east, and north to south. We are so very lucky. Yet, this is not to say that there aren't good yumcha places in Melbourne's Chinatown, just that they have healthy competition from the suburbs. Shark Fin Inn is one of those places in Chinatown that have been around for a while. It's sister branch, Shark Fin House is just a block away (and is the one that usually has queues waiting to get in weekend mornings). From its name, you know that this place was not founded recently, when the consumption of sharkfin has been frowned upon... it's been around since 1980. This is the original restaurant of the Shark Fin group. This restaurant was also awarded best yumcha by a radio program recently - but I'll be the judge of that! 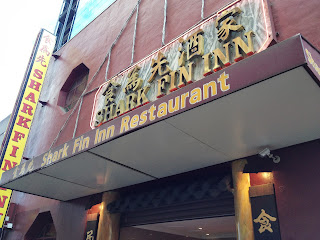 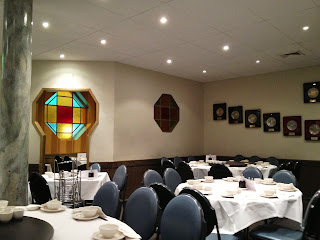 In my opinion, this is a nicer space than Shark Fin House down the road because it simple has more space, and you are not sitting too closely next to strangers. Across both levels, you get a feeling of space. However, being the original restaurant with little refurbishment since 1980, the decorations are a bit dated, though not completely unacceptable. For example, on the ground floor, most of the deco are the framed up restaurant awards they have received since in the 1980s. I just think that for a restaurant of its calibre, it could do with a bit of sprucing up to give it a more contemporary feel.

It is a relatively child-friendly space though not good if they run around. It has 'private room dining space' that's a bit separate from the main dining space but still open, and a generally congenial atmosphere. Parking is always a pain in the city of course.

The Food
The food is traditional yumcha and the offerings are pretty standard. Most of it is tasty and fresh, though not always at the perfect hot temperature. This is largely because they don't use the steam bath carts that most yum cha places have. They tend to use conventional trays, so the food does cool down quite quickly. The good news too is that I didn't feel thirsty even after the very satisfying meal, which means, they probably don't use too much MSG, if at all.

The highlights for me were the Chicken Feet (Phoenix Claws) - they were truly tender and yummy. I really enjoyed them. The Glutinuous Fried Rice was not bad, as it was still moist unlike some other places. If you like dried shrimp, they serve it with lashing of it, the way the SEAsians love it.
﻿
﻿

The BBQ Pork Pastries were good though the BBQ pork inside was very sweet - some would really like that - I prefer it a bit more savoury.

The Prawn Rolls were fabulous... so yummy and juicy. However, they used the harder styled tofu in the Seafood Tofu, which doesn't work as well in my opinion.

The Service
The service is one of the nicest and best in Chinatown. They are well trained and take time to attend to your needs. They are also not too pushy but very helpful in suggesting dishes you might like, and actually one of the only places that pays attention to what you have already had, instead of offering you the same thing over and over and over again. It is a real pleasant experience, even when it got really hectic. I am really impressed with how well they pay attention to the needs of customers.

Overall
I like taking guests here as it is not too hectic and crazy, while the food is still pretty good. Although I don't think it's the best yumcha in Melbourne, it's certainly above average. So, amongst all the places in Chinatown, it's one of the better ones in my opinion.

Cultural Moment
Queueing - it's not a strong point in many parts of Asia (Japan is the definite exception). So, even in Australia - it seems many who originate from Asia also bring that trait along with them. I know I have become comepletely Australianised because I get upset at people not queueing. This was certainly the case here while waiting to get into Shark Fin Inn.

In so many parts of Asia, Asians just jump in, even when there's obviously a queue, every body seems to think they have a good reason for jumping ahead and pushing in. I guess when you have so many people in a limited space, he/she who is loudest wins. There just isn't a queueing culture in many parts of Asia, unless if you are in a place where you have to take a number.

So, today at Shark Finn Inn, there were a lot of people just barging in, ahead of others who had arrived first and were waiting for the restaurant to open. There wasn't a moment where they looked around and wonder why everyone was standing around - they just pushed in ahead to try to get in anyway. You can see the attitude is different - so how do you deal with a situation like this? You pushed ahead too, politely but nevertheless, you push ahead to get service. We certainly did that the moment the restaurant opened or risk waiting for everyone to jump in ahead who had arrived later (even though we had booked ahead). It's all good - no need to get frustrated, just as long as you understand the context.