Despite its name which alludes to grandeur - place is definitely a student joint - it's cheap and cheerful, lacks real effort in service though they are not rude, and really basic food. There are many other places around The Uni of Melbourne which are student eateries that make a lot more effort. What it has is location because its situated near all the student colleges. Therefore, don't be expecting anything flash at all. 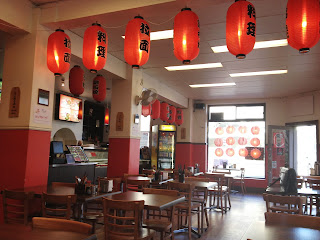 It's a cheery place with lovely lanterns that create a pretty picture, especially at night. It's a clear restaurant and usually a bit too cold in winter as it's a relatively open space. As far as basic eateries go, it's a simple space with pretty lights. Forget about parking here but I suspect you won't be driving here just for this place.

Things to do Nearby: Lygon Street is close by and there's the Potter Gallery at the University which is diagonal to this space.

The Food
They serve basic average Japanese food with not particular nods to authenticity. It would be hard to differentiate it from the many Japanese food hall type foods. That's not to say that it is horrible food - it just depends on what you are looking for. There's really nothing to rave about but then, for under $10, one really cannot expect an earth shattering experience either. It's just very basic and many students would argue that it's value for money that's really important here. They have a range of bento boxes and their rice bowls come in 2 sizes, which to me indicates that they really know their student diners rather well.
The Service
The service is basic and you order at the counter and they bring the food to you. They are relatively friendly and rather pleasant, which is a plus for a student eatery. Other than taking your order and bringing you your food, there's usually not interest in further engagement.

Overall
It's clearly a student joint and given there are so many in the area, it continues to face stiff competition from the likes of Don Tojo and others. It is however, closest to the high density student colleges up the top of Swanston Street.

Cultural Moment
The Bento Box which is one of the most popular way to serve Japanese in the Western World also exists in Japan, in many takeaway places. These pre-packaged meals never fail to look good and appetising but in reality, the quality is of varying standard and you generally get what you pay for in Japan. The more expensive ones tend to be of higher quality and the ones that you buy off the little stalls at the smaller train stations are pretty basic in flavour and if you don't have access to a microwave oven, you're in for a cold meal. It is at the very core a 'packed lunch', and might come in elaborate hand-painted lacquerware or even basic styro-foam or disposable bamboo trays.

The basic component is of course, rice but beyond that, you will find whole varieties of ingredients/dishes to go with the rice. Sometimes, it may include fruits, or other desserts, various kinds of veg or salad, and a main protein. There's a lot of resources online that will be able to provide more information about bento boxes.
Posted by Shanton at 05:49