This is a food hall outlet with a grand name. It is the perfect place for a quick meal if you are in the middle shopping - it's not fine dining and not even casual dining - to me, it's quick dining - just above fast food dining. 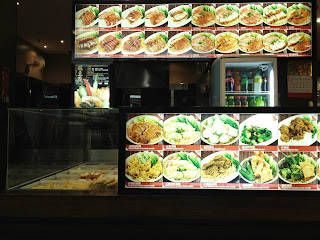 It's in a mall and has its own section - essentially very much like a food hall. There's no atmosphere, it's an eat and go place. You have to fight for a space at busy lunch times and squeeze in with everyone else. It's probably better to takeaway but there's not a lot of places to sit down and eat nearby.

Things to do Nearby: This is in Target Centre - so, for shoppers, this is a place to stop for a quick meal. It's also near Bourke Street Mall.

The Food
The best things on the menu are the BBQ meats. The quality of the noodles is good and it's generally good Chinese BBQ. Therefore, any of the BBQ meats in your favourite combinations with noodles (dry or soup) or rice would work pretty well up to about 3pm. However, everything else is pretty average because of the limited cooking space, some of their dishes are going to have to be pre-cooked and then microwaved. As for the Yong Tofu - well others have written about the MSG laden soup and that's quite true here and the pieces are not fantastic in any case though it's one of the few that does serve Yong Tofu in the area.

The Service
There is none. You order at the counter, pick up your own cutlery and tea and minmalist condiments. Find a seat yourself and then go pick up your meal when your number is shouted out. It is what you would expect from a food hall and so, as long as you are aware of that and accept it, you'll be fine. They could improve on their friendliness though and perhaps be better and more gracious in helping out when requested.

Overall
Again - if I am after a quick meal in the middle of a busy day and I am dining alone - this is perfect but not for much else... definitely not for big groups or for traveling with pram.

Cultural Moment
Standards standards standards... there are some of the public reviewers on Urbanspoon and other similar sites that set a pretty high bar for all the restaurants they review - even the food hall type places. In addition, they tend to hold all these restaurants to the faded memories of the best restaurants back in the origin country of the food. So, whether they have come from those countries or have visited those countries, there are those who will say "It's not as good as in Country X".

I have to admit - I struggle quite a bit with that kind of sentiment and review. Firstly, I think it's grossly unfair to hold all restaurants to the same standard (and if you are paying food hall prices - you really have no call to expect restaurant level service). This is not to say you can't expect good food but I think contextualisation is everything here.

Secondly, I think it's also not right to expect restaurants in Melbourne to serve food to the exact replication of the best of the food back in the origin country. Why not? Well, because the ingredients are different, don't people realise that meats taste different in different parts of the world because of the way they are farmed, produced and reproduced? So, you are never going to get the exact replica across all countries where they source their meats from difference parts of the world.

Thirdly, many compare the average food outlet here to their favourite outlet in Country X. The reality is if you compare the average to the average - you won't get much of a difference. There's probably a lot more authentic and nice outlets in Country X, but also probably just as many that serve bad to average food. So, when you say, it's not as good as 'back home' - have you actually thought through what you are saying? Again, it's all about contextualisation.

Anyway, that's enough of a rant. Suffice to say, I have had bad food in all parts of Asia and the reality is, some are worse than the ones in Melbourne.