In a highly competitive area because there are four Malaysian restaurants of relatively good quality (including the icon that is Laksa King), this restaurant is usually the least full of the four, possibly because it is a larger restaurant. This doesn't mean that it is not a good restaurant... just that competition is pretty stiff in the area. 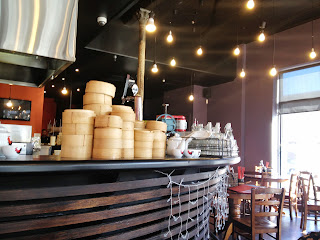 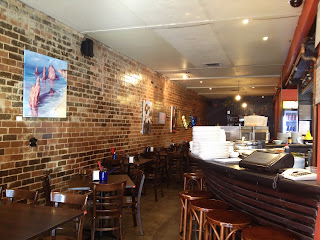 This is a pleasant enough space and large enough so that you don't have to share tables and be forced to listen to the conversations of strangers with their backs against yours. It's certainly the most spacious of the Malaysian restaurants within the 400m radius. There is some attempt to create an ambiance with various objects that might remind one of Malaysia. It's definitely a child friendly place, including having clean high chairs should you need them. When it gets busy, there's usually a buzz here without overwhelming noisiness.

Things to do Nearby: The shops of Racecourse Road in Kensington during the day but that's about it. 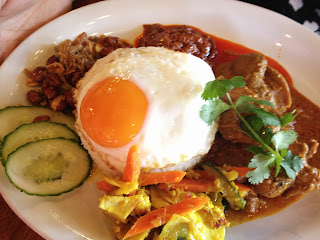 The food is not bad but nor is it a stand out. Admittedly, I have not tried its main differentiator from the other Malaysian offerings in the area - the Crab dishes. Partly, this is because I can't be bothered and I just haven't got round to it. I might be wrong but one of the things that clearly stands out here is their portion sizes. I think it's the biggest compared to the other Malaysian places in the area. I could barely finish my lunch. The Nasi Lemak (pictured right) itself was pretty good and I loved that they had generous portions of achar (pickled vegetables), and peanuts with fried anchovies. The let-down for me, was the Chicken Curry which was basically overpowered by the star anise they used too liberally in a very Chinese curry.

The Wat Dan Hor (below) on the other hand was really tasty though they definitely have a more Kuala Lumpur style with darker soya sauce in this dish, rather than the lighter style of Ipoh and even Penang. For some, this is not authentic - for me - I was very full and happy at the end. 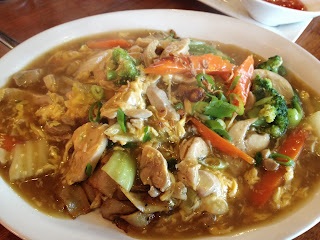 The Service
They do have very friendly service and highly obliging. Probably the second best service amongst the 4 Malaysian places in the area. It is pretty good though the only thing that sets them back slightly is probably their food knowledge of Malaysian dishes is slightly below par, unlike the confidence of the wait staff at Grand Tofu.

Overall
I think I would go there occasionally when the other places are really full. The thing about the 4 Malaysian places here is this - you really just need to know your own taste and preferences. All 4 have some very similar dishes but cook them somewhat differently. For example, they all do Hainanese Chicken Rice... but who has the best one? The jury is still out on that one but I like Chef Lagenda because they have the Roast Chicken option. That's just one of the dishes - we could have a debate around it till the chickens are cooked... One day I might compare the various dishes across each of the 4 Malaysian restaurants.

Cultural Moment
Some people ask "How can one place sustain so many Malaysian restaurants?" Ummmm... "How can a tiny suburb sustain 3 pubs?". They might be alluding to the idea that such an exotic cuisine might not attract enough customers to sustain 4 'similar' restaurants but a pub? Everybody here drinks!

However, that's just the point, I think that Malaysian cuisine is no longer considered "exotic" especially when you are looking at a city like Melbourne. Dare I say, most people must have tried some Malaysian food in the past and might be able to name at least a couple of Malaysian dishes. Perhaps, Malaysian food hasn't quite reached the status of Italian food or Vietnamese food yet, here in Melbourne (where you can have a whole street of Italian or Vietnamese restaurants and have them all do quite well). However, I think it must be getting close in places like Flemington, Springvale, Glen Waverly and Clayton.

This is the joy of Melbourne - that you can have enough choice amongst the various cuisines, even the 'exotic ones', and have them all do well so they can all challenge each other to do better. How lucky are Melbournians!
Posted by Shanton at 05:04