Set between two well established Vietnamese Noodle Houses on Swanston Street, this relatively newcomer (since late 2010) seems to be holding its own. I think that like many of the restaurants on this part of Swanston Street, it survives on passing trade rather than a loyal clientale. It's difficult to stand out in the midst of so much competition.

The Place
There's nothing to rave or complain about. Like many similar places, they seat diners very close to each other and although it does create a buzz, it can lead to awkward conversations or people looking at what others are eating a bit too closely. It feels like a well used place and is usually busy in the evenings. They haven't made much of an effort at creating an ambience and it almost feels like parts of the deco are left over from the previous occupier. Nevertheless, the moveable chairs and tables makes it easy for different group sizes and prams. 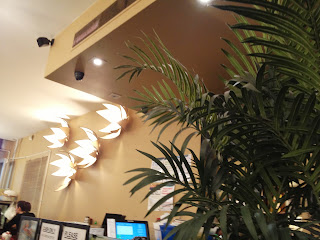 Things to do Nearby: Right in the heart of Swanston Street and round the corner from QV on one side the Bourke Street Mall on the other side, as well as Chinatown closeby.

The Food
This is not bad food but nothing to really rave about. It is pretty average, especially the rice noodle soups.  The pictures at the front of the restaurant certainly looked really attractive but I didn't order any of the fried foods, so will have to try it out next time.In fact the sliced beef was somewhat chewy, which is unfortunate. They were generous with the noodles but I could not finish the noodles and would have preferred more soup instead. The soup itself was just so so, tending towards sweetness. So, all in all, it's a bit hit and miss. 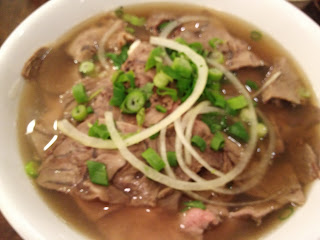 The Service
The service is polite and not rude, which is good. It's one of the places where you write down your order on a slip of paper for them, which minimises interaction a bit. They are good about various request for extra lemon slices for my soup. It's a pretty efficient place too with all the dishes coming together so all diners of the group can start their respective meals together.

Overall
It is not necessarily my go-to place, so, I am not a convert. There are heaps of places around, and though I might go back to try out some of the other dishes, it won't be in a hurry. As readers know, I love raving about places that are good - this is not the case here. However, I am not complaining either - it's all just average for me.

Cultural Moment
The Vietnamese came to Australia in large numbers towards the end of and after the Vietnam War (1975 - 1983), and represent the largest movement of Asian populations into Australia since the Gold Rush. They came into an Australia which was just coming out of the White Australia Policy. In that 40 odd years and across 2 - 3 generations, they have had quite a turbulent time in Australia with some spectacular highs and lows. It's an amazing story, part of which is documented in the Once Upon a Time in Cabramatta.

Some of the greatest achievements come in the form of our most prominent Vietnamese Australians across different levels of society. The ones I am aware of include;
Anh Do - Popular comedian, actor and author.
Tan Le - Former Young Australian of the Year (1997) and entrepreneur
Luke Nguyen - Celebrity Chef
Nam Le - Author of "The Boat"
Natalie Tran - Youtube Celebrity
Quan Yeomans - Band member of Regurgitator
Huy Truong - Wishlist and Jurlique Businessperson
In the mix, are also heartbreaking stories of crime and pain. It's a rich history in a short 40 years, characterised by the fight for their rights, the amazing achievements, their loss and struggle with integration, their interaction with the wider community, and even their withdrawal from that same community. It's a study in interaction and integration between cultures - and yet, at the end of the day - it's the stories of the individuals that matter most.

It's also the diverse stories of refugees who have to leave their country and start over in another - what they need is compassion and help - not derision and contempt.