Although this is branded as a Thai and Burmese restaurant, it is Burmese run. There are not that many Burmese restaurants in Melbourne. So, I always look out for them with interest. The less common dishes doesn't mean they are not nice, just that not as many people are aware of them or cook them well. This restaurant is licensed and also has a cash only policy. 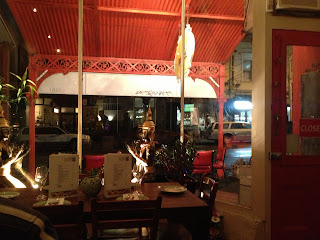 This is a nice simple eating house where the tables are well spaced. Sound insulation is not great here and I imagine it would be really noisy if it was more crowded. It's relatively child friendly because there's a bit of space for prams and the like. The lights are comfortable if a bit low.


The Food
For this blog entry, I am just focusing on Burmese offerings, although the Curry Puffs (Thai style are worth mentioning) - we had both the chicken and vegetarian ones and they were quite tasty, not a lot of substance or meat or vege but the taste is there with fine light pastry. 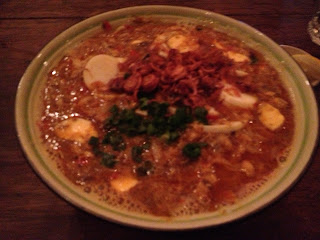 Mohinga (on the left) is a really fishy soup with rice noodles. The restaurant and many other sources call it Burma's national dish and it is sold everyway by street hawkers. The Mohinga here is not quite sour enough for my taste though it is tasty. A word of warning for the wise, I requested that it should be medium spiciness - but boy! I was sweating. (I will share some resources in the Cultural Moment section about these dishes) I should have asked for much more lemon, though lime would have been preferable.

Ohn-No Khaw Suey is a coconut milk and chick pea based chicken broth noodle dish. Thick soup with wheat noodles (which is hard to find in Melbourne) - the restaurant serves this with Hokkien Noodles, which is not quite right and their version is really sweet. It could have done with a more savoury taste and again, more lime. It was also missing the crunch of something crispy on top - something to give the crunch it needs (which could be crunchy noodles, or crispy bean fritters, or even prawn crackers). 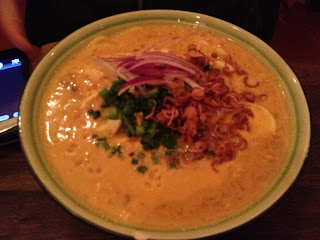 The Service
The service is friendly but they do struggle a bit with English. There's no doubt it is friendly and down to earth, with not attitude. A little bit of patience is important in such a situation. So, if you can deal with that, it's actually not bad service at all but I can imagine some people being frustrated especially if it's really crowded and people are really hungry. 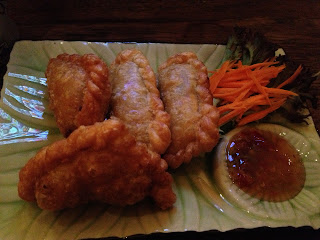 Overall
I look forward to going a trying the other dishes here but until then, I will hold my judgement of this place.

Cultural Moment
I know too little about Burmese cuisine though I am lucky enough to have tasted Nanna's Burmese dishes. It is probably better to share some great internet resources with you. Different regions of Burma, unsurprisingly have slightly different versions of Mohinga, some with fried fish fritters, others like it sweeter with tomato thrown in, while the most common is the one in Rangoon. Luke Nguyen featured this in his program on SBS;
http://www.sbs.com.au/food/recipe/13850/Mohinga

So - to me, Mohinga is to Penang Laksa and Ohn-No Khaw Suey is to Curry Laksa. Khaw Suey was my introduction to Burmese cuisine, and the version that I had was spicy, tangy, fishy, coconuty, soft, crunchy, savoury and sweet all at the same time. It was really good, and Nanna made - all other versions since have been to thick or too sweet or lacking something or the other. Ah Well.