This is a simple eatery that does not present itself as anything other than a basic cafe where you have to order at the counter, with staff who have a pretty casual attitude (much like many places in Indonesia), and then wait patiently for the food to come. The food ranges from really yummy to really average depending on what you order. I do like it and will go again and again (though I know that it doesn't always serve the healthiest meals). 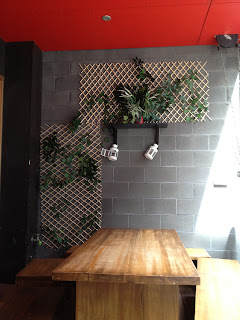 The Place
A basic eatery with tables close together across two levels. Limited outside seating is also available, and is usually crowded around lunch time. Set on King's Street, there's no easy parking (unless you pay) but for those who work in the area, it seems to be quite a hit. It can get pretty cold here and is not the most child friendly venue as there's limited space. It's a relatively clear restaurant and kitchen (which is obvious to all customers).   Things to do Nearby: It's near the Bourke Street corner of King Street. Flagstaff Garden is a short walk away and Etihad Stadium is down the road.

The Food
It serves traditional Indonesian hawker style dishes, with some really notable highlights and some really average dishes. On the whole, it's more hit than miss (unless if you are a health freak - then by all means - move along very quickly).
﻿
﻿

Grilled Beef Ribs and Grilled Lamb Ribs - without doubt, these are the stars of Kedai Satay. Lip smacking, greasy, tasty grilled ribs with a side of coleslaw, on steamed rice. It has a touch of spice, peanut sauce and is inclined towards sweetness (that the Indonesians love so much - more on this later). Now that I have tried many of the dishes - these are the ones I will go back to... not just me, but Robbie craves this too.

Soto Ayam and Soto Betawi - These iconic Indonesian soups are traditionally pretty greasy (ie, there's usually a visible layer of hot tasty oil floating on the soup). The ones here are no exceptions but not as greasy as some I have seen. What they do here though can be pretty spectacularly chilli hot (especially the Soto Betawi). If you are in between business meetings, I'd advise against ordering these. They will burn your tongue and if you are like me, my collar was really wet by the time I was done.

The Satay here - the cafe's namesake is pretty average and for those not used to Indonesian satays, they tend to drench it in peanut sauce rather than have a side dipping sauce. This is also tampered with the dark sweet soy.   They have recently introduce a range of Penyets (smashed meats - sounds worse than it tastes) which I am looking forward to trying. Will update this blog once I have sampled them.
﻿
﻿The Service
You order at the counter, they bring the food to you. It's a casual and friendly place. There's very little attitude here and they do what they have to do in a friendly manner. As some reviewers on Urbanspoon have pointed out, sometimes, the staff has her baby in arm (while taking your order) - so cute (and baby is currently 7 months if you were wondering).

Overall
Like I said earlier, I would go again because it does serve tasty food. Once you know what you like, that's what you'd go there for. Of course, like any place, there will be some dishes that are not well done, so it'd be ridiculous to base a whole review on one dish. Overall, this is definitely one to recommend.

Cultural Moment
From my childhood days, Indonesian food has intrigued me. It seems like Malay food, which I am more familiar with, yet, it's just not the same. Many of the dishes seem even to have similar origins and yet, there are distinct differences.

From my perspective, here are the major differences that might help you decide which you would prefer at different points;
Spices - While both cultures like their spices, I think that Malay dishes are much punchier and rich, while Indonesian spices are much more subtle. Perhaps the punchier Malay dishes are due to Indian influences which are less obvious in Indonesia, where a balance of spices are go way back.

Sweet Soy (Kecap Manis) and Tamarind (Assam) - Okay, Indonesians love their Kecap Manis like Aussies love their vegemite... well, even MORE so because they put it in their satays, their springrolls, their tahu telor (deepfried beancurd with eggs), and just generally as a dipping sauce. We don't do that with vegemite! Sweet soy is virtually missing from Malay cuisine, so Malay satays, springrolls and tahu telors are quite different and tends to be much more savoury. Malay cuisine on the other hand features Assam more prominently, clearly the influence of Thai culture, which is more tangy.

Raw Vegetables - Other than the ocassional raw tomato, cucumber (sometimes, more of a garnish), there's not a whole lot of raw vegetables dishes in Malay cuisine. Indonesian cuisine on the other hand features a number of dishes with raw vegetables, like karedok (think Gado Gado but with raw vegies), lawar (which is more Balinese), and they also serve lots more raw vegetables as sides.

Some people think that Malay cuisine is hotter but this means they haven't tried the killer sambals of Indonesian cuisine. I think that while Malay dishes integrate their chillies into the dishes directly, many Indonesian dishes have the chillies on the side as a requisite, so that punters can add as much or as little as they like.

This is my limited perspective on the main differences. Would be happy to hear if you have different opinions or anything to add.