http://wontonhouse.com.au/
This is one of 3 branches of Wonton House and also one of many Cantonese styled restaurants in the CBD around Russell Street and Little Bourke Street. Therefore competition is stiff. What this place does well is the setting, with its tasteful modern Chinese deco (though it cannot help but post a few special items in paper form on the walls - sooner or later, they all seem to do this). The food is average and the service is actually a bit better than some of the places I have been to. Because of its relatively nice setting and middling flavours, it attracts an eclectic mix of clientale that ranges from Chinese to Europeans.

The Place
Being on Russell Street, there's a lot of competition and this place stands out because it is clean, tastefully decorated and never too rowdy. The lighting is just right and there's great ventilation. Although I do find the stools somewhat uncomfortable, this is like many other restaurants that are not set out for you to linger a long time. There is however, an upstairs room for more private functions. It's one of the nicer places in Chinatown for its price range and is really its edge. The tables are not spaced too closely together like some of the other places that tend to attract a student crowd, so there's space for prams too. Parking is of course difficult in the area unless you pay for it.

Things to do Nearby: You're basically in Chinatown and the Bourke Street and Lonsdale Street precincts. Heaps to do and it's across from the Comics Lounge.

The Food
One thing I have to say about this place - there's no issue with portion size - in fact, I think they tend towards being overly generous. The quality of the food though is middling. It's far from being the worst but it's also not the best. This place is no Rose Garden, which serves a similar style of food. However, it does the basics relatively well if you want to dine in a slightly classier place.

The Wontons are presumably their signature dish and they are ok but not as smooth and fresh as some other places. Dont' get me wrong, they are still tasty but sometimes are a bit hard (or overcooked). 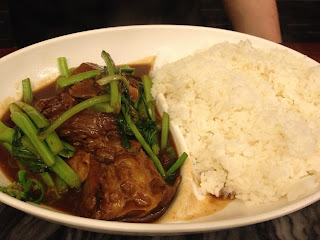 The Braised Beef Brisket is a highlight though it is a bit sweeter that the way I like it. The ones served with rice are nice and rich tasting, the ones in the soup are less impressive for me. 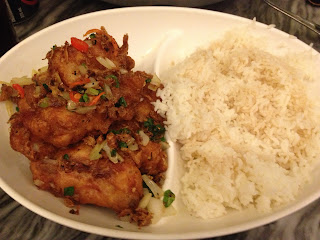 I also had the Salted and Spicy Chicken Ribs on Rice, which is another highlight and while it is good, the ones here are pretty heavy... and comes with absolutely no vegetables (for those of you who care - which I do too). You can see this in the picture above.

The Service
The service is relatively ok but variable depending on who is serving you. They are not overly unfriendly, but neither are they friendly. They are helpful when they can and when their English allows them to. When it is not busy, they are more patient and have more time to work out and explain things with those who do not speak Cantonese or Mandarin. It is certainly better service than a number of similar places nearby such as Pacific Seafood BBQ House (downright rude) and Nam Loong Seafood (with its somewhat dodgy and racist policies). Like a number of other reviewers have mentioned, they occasionally do stand around and laugh a bit loudly... but it means they are happy workers which can only be a good thing, as long as they pay attention to the diners, which they do.

Overall
It is a middling place as I have said before. Yes, there are places with better food - but few have as nice an environment in the vicinity, where you don't feel rushed and have to cope with the attitude. Sometimes, I just want a more relaxed environment and this place offers that while still serving relatively nice food. So, while I won't be a frequent diner, it will be an option once in a while.

Cultural Moment
Ok - this is a rant... Why can't we have it all? There are so many Cantonese Style Eateries around town but not one single one has the right combination of great service and great food in a nice clean setting. You usually get one, or at best two of those three things. Will someone tell me why? Can the restaurant owners tell me why? It must be possible to have all three. Surely, this is not a Clark Kent/Superman thing where you have to choose which one you want and not have the other. Some of the best food is served in the most basic and dodgy eating places. I have yet to experience a place where everything is just right.

Am I too demanding and one of those diners who always find something to whinge about? Hmmm... time for self-reflection... I honestly think I am quite reasonable. I try to look at each restaurant from different perspectives and contextualise it for what it is, its target audience, and they type of restaurant it sets out to be, and then judge it in that context. I hope you, the reader, think so too. Would love to hear from you.
Posted by Shanton at 04:29