This place is the Express / Lite version of the Pacific Seafood chain. It is so quick to get you in and out that express is the only way to describe it. It is also totally 'lite' on service that you shouldn't expect any. This is so unfortunate because it has a great potential to help advertise its more well equiped sisters in South Yarra and Richmond but instead - it actually deters people from going a bit further out. Therefore, unsurprisingly, it has a really low score on Urbanspoon and is easily the worst performing of the chain. This place is clearly targeted at students who can't be bothered to cook and don't mind being treated shabily because they are used to it. A real pity as that should not be how one runs a restaurant. 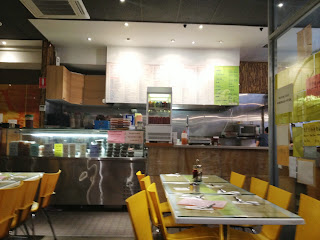 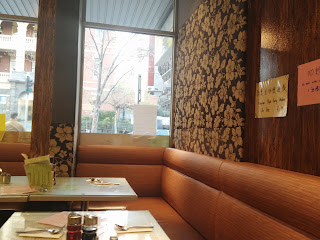 This is a convenient place to get to, being just across from QV. It is quite a big space though they are not averse to getting people to share tables. There's not a whole lot of atmosphere here - it's just a dining hall and can get pretty noisy. Parking is either at QV or if you are really lucky, on Lonsdale, or if you know them, there are a couple of good parking spots in Mantra and along Lonsdale which are quite cheap.

Things to do Nearby: Chinatown, QV and Trades Hall and the State Library are 10 minutes and 5 minutes away respectively.

The Food
As far as the food goes, this is about the same as the other branches of Pacific Seafood BBQ, which is to say, it's pretty good and tasty. The servings are quite generous but you shouldn't expect the banquest style dishes that the other branches offers. Here, it's a quick meal and everything from their BBQ Roasts to Instant Noodles is to really get you in and out, rather than dine at a leisurely pace. Therefore, the highlights here are any of the roast dishes.

BBQ Pork and Roast Pork Rice - whether it's in combination or by themself on rice, this is pretty good here and is better than average.

Soy Chicken - the soy chicken here is as it should be (which means that it is slightly pink in the bones), and that means it's not for everyone. The meat is tender because it's poached in soy sauce and not cooked right through. If you are worried about that, don't order this... go for the roasts. 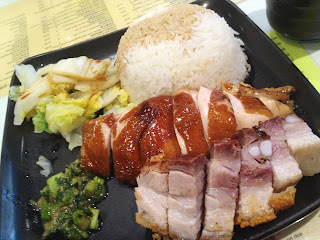 They also have a range of Baked Rice (Hong Kong style) which is great if you like cheesy rice - seriously cheesy with various combinations of meat and flavourings. There's also a thing called French Toast here which is probably not what you imagine. It's a really thick almost half loaf of bread... really - do your research on this one and know what you are ordering.

The Service
The nicest thing I could say about the service here is that it's not rude. So, there are worse places but seriously - not that many. There's a too cool for school attitude about some of the wait staff and others frankly can't be bothered. They treat everyone like a student who's there for a cheap quick eat and won't complain about bad service. Well, I think this explains the low score on Urbanspoon plus it's the worst way to introduce someone to the great food of Pacific Seafood BBQ. They seriously need an attitude check because Melbourne expects better. However, a more recent visit indicates, there might be a slow shift because there is less of an attitude - I will try to get there again later in the year to see if the change is permanent.

Overall
I would not bring friends there and I would only go there if I am by myself and would not feel embarassed about "bad Asian service" because seriously - they make no effort. I would also only go there if the other places in Chinatown are really crowded or if I am just going to do takeaway and I happen to be in the vicinity and can't be bothered going further into Little Bourke Street (ie. when I am really lazy or when I am in a mood where I don't care about bad service - which is rare).

Cultural Moment
What does customer service actually mean? I have been to places where customer service is a very loose term. In Kuching where I was born, there is a place where you have to wait for about an hour before you are asked to order, and then another 15- 20 minutes before you actually get your food. I was there very recently and waited patiently for 90 minutes because that's just how the system works but they were actually quite friendly. You just know what to expect from them and they are up front about it. I have also been to places in Melbourne where they tell you what you should have and bring out food they want to serve you and you just have to deal with it but they are friendly and that's just how their system works. Such places have quirky but friendly service.

Then there's really bad racist service like the ones I have mentioned in the other bad reviews on this blog (that's actually a tag for my blog entries). However, you don't have to be racist to profer bad service. The following things add up to bad service;
These are bad in ANY culture...
Posted by Shanton at 08:54