Named after one of the most famous streets in Beijing, known for its food stalls as well as being a bit of a tourist trap. This fully licensed restaurant on Lygon has a great location and set up but doesn't seem to attract the crowd like its namesake. It's also not very well known and given the prime location, this does not bode well for a restaurant. So, what is going on here? 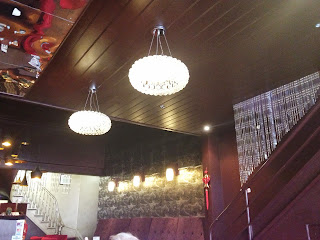 This is a well set up place with tasteful and unashamedly Chinese deco. It has the trappings of a mid range restaurant and is quite beautifully lit at night. The tables are big, though they are placed quite close to each other. However, it is not well maintained in parts and seems slightly rundown.Over some of the weekends, they have a chef doing demonstrations in the window in a tiny space. It is not necessarily well set up for kids and parking is the usual Lygon Street struggle.

Things to do nearby:: Lygon Street shops, the Museum and IMAX is very close by

The Food
The food is rather average Northern Chinese style which is probably why it doesn't have a huge crowd. In the menu, it also has a range of Southeast Asian dishes like Char Kway Teow, Singapore Noodles, Char Hor Fun! It totally baffled me but the dishes I saw being served had a distinctly Northern Chinese look, and combination of ingredients. I wonder why they have felt the need to offer the range instead of focusing on the dishes they do well. 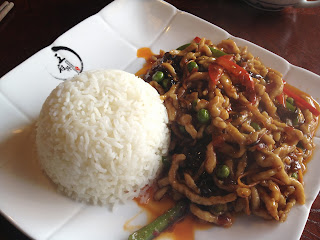 Their dumplings are not bad at all but they are competing with Dumpling Den which is no more than 5 minutes away, and serves them up just as well. I also have had the Fish Flavoured Shredded Pork Stir Fry with Rice (pictured right). This is a quintessential Beijing and Shanghai dish, which has a balance of sourness, spiciness and sweetness. The one I got was pretty much just sweet and greasy.

I think it's important to get the balance right. The reality is, this area could do with a good mid range Asian restaurant that serves good food and provide great service. However, currently, it doesn't seem to have found its range yet.

The Service
The service is polite and very Chinese. It hasn't really adapted to Western standards. Why do I say this? Well - primarily because although they are really polite, they do not hesitate to seat strangers together at lunch time without asking their customers if they mind sharing. It's just a matter of fact, there's space - just seat the newcomers where existing diners are half way through their meal, without asking. In addition, the dishes come out when they are ready and are not timed together. These are somewhat typical of places I have been to in China. It's not necessarily a bad thing, because they are really polite - but some might be a bit surprised.

Overall
I might go again ocassionally for lunch because it does have a nice set up but I will avoid the Southeast Asian dishes. It's a great place for a lunch meeting because of the bigger tables and the fact that it's not one of those really busy noisy student joints.
Cultural Moment
Wang Fu Jing is a place that's almost a must to visit when in Beijing. It's now a huge pedestrian mall with shops on either side, from the big brands to quirky local products. The street side stalls that serve up a huge range of local delicacies (some of which might be a bit challenging, such as starfish, scorpions and grasshoppers) is worth trying. Quite affordable mostly and you can eat as you walk along the streets or in the small bars. It is a buzzing street market and my recommendation is to go at night.

The one thing worth noting is to be very careful about 'friendly con-artists' who pose as students wanting to practice their English and taking you to a bar for tea and then - you will be surprised how much a pot of tea could get up to. Just hang on to your enthusiasm about meeting local strangers and you should be fine.
Posted by Shanton at 03:32