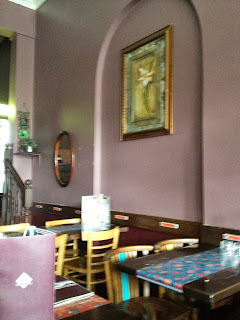 With an increasing number of low cost Asian eateries in this part of Lygon, it's important to differentiate itself from others, particularly when visitors to Lygon have come to expect relatively good service and food over the years. This is a small place that is very informal and has not necessarily stood out for anything other than the style of food and its halal status (though it's not the only halal restaurant in the area either).

The Place
Lazzat has the potential to be a nice set up but is essentially a basic eatery with quite nice decoration, set up by previous management. It's not a huge space and when it is full, you would end up sitting very close to other diners. Ocassionally, when it is at its peak, the buzz from other diners create a great atmosphere but when it is quiet, it is very quiet and the silence is almost deafening (without any background music). Now, I am not a believer in loud background music being imposed on diners, but something in the background can actually help.

Things to do Nearby: This is on Lygon Street and also a short walk to the Museum and IMAX Theatre.

The Food
Having been here when it was under the previous management when they served great food from the bain-marie, I thought I'd give it a go since new management has taken over the reigns. The food was different and the bain-marie is gone (well, it's still there, but just covered up). On the day I visited with my friend, Catherine, half the items on the menu were not available (no Nasi Lemak and no Roti at lunch time. I tried ordering the oxtail soup and that was not available as well). Some day, I might get to try it. The food here reminds me of what you would get in a cafeteria in a Malay Kampung back in Malaysia where they cook a range of dishes (including Chinese dishes) with a Malay twist and taste. That's not to say it's not authentic but one knows that Cantonese fried noodles done by the Cantonese will be different to those done to suit Malay tastes - nice, but different.


The Seafood Char Kway Teow (fried flat rice noodles) is really quite tasty though it's not as spicy as I expected. They use really fresh seafood and the noodles are well done overall, with the right level of smokiness and moistness. 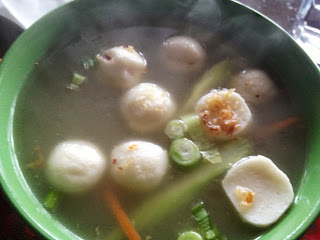 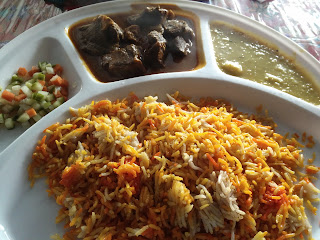 The Biryani Rice was a big disappointment to me. I think I was expecting too much for $9.50, but I have had Nasi Biryani here previously and it had been good. In the Cultural Moment section, I am going to discuss Biryani as it should be done. In this case, this was a disappointment because it was a very dry offering with not real flavour. The lamb curry was basic and not spicy but to top it all off, it was served with a basic dhal and pickles on a plastic thali style plate. I was clearly expecting too much! However, the main problem was not just the way the food was served but it's really about the quality of the dry rice.

The Service
The service is really friendly and casual. I think they have a great kampung style hospitality that is understated but friendly. It's not fine dining service but works for me. Some might not be used to the relaxed casual manner of the service, but it's almost like visiting friends for a meal together.

Overall
I would go again to try the other dishes because I do like this style of food and think that they do some dishes well enough to try the range (if they were available).

Cultural Moment
Biryani rice originates from Indian and Persian cuisine and the best biryani would have been great one dish meal wonders where the spices, rice and meat are brought together and the flavours are infused throughout the dish. The meat and the rice are usually cooked separate initially and then brought together, layered and baked in the oven to finish up the cooking process. As a result, there are layers of flavour and texture throughout this dish. However, it is very easy to get it all wrong and have really dry rice.
It is clearly not a dish that one can take short cuts with. In many parts, it is served with raita or pickles as well. Of course, there are many different regional differences all over the South Asia and Southeast Asia, with different combinations of ingredients. Ah! I miss good Nasi Biryani.