This restaurant is usually full in the evenings and even at lunch. Yet, it has a really low score on Urbanspoon with quite a bit of displeasure focused on the service and authenticity of the food. It is in a prime location on Swanston Street to attract passing trade, workers around the area, students and tourists. Perhaps it is just trading on location. However, I do know that the previous restaurant in this exact location didn't do as well because it was pitched at the wrong level. Ghin Khao has clearly got something right from the crowds it attracts. So, what is it all about?

This two level space is tastefully decorated and contemporary. It is an attractive looking restaurant though like many places in the area, they do seat the diners a bit too close to each other. However, it's no where near as squishy as some of the others withing 100 metres. It's not bad at all as far as sound insulation and ventilation goes. So, it's actually well set up across two levels. I have seen groups of up to 10 dining here with ease.

Things to do Nearby: Set right on Swanston Street where much of the action is, and a block away from QV in one direction, and Bourke Street Mall in the other, there's plenty to see.

The Food
Firstly the portions here are very generous and they don't hold back on relatively fresh ingredients. The food is actually not bad at all but it is watered down considerably for Australian tastebuds. This is not to say it doesn't have authentic flavours - all the basic tastes are still there but they don't have the intensity you might expect, if you are comparing it against the food in Thailand. Some would argue that the lack of intensity renders the food here inauthentic. Yet, having been a Thailand a number of times, I know that not all Thai dishes have to be that intense and not even all Thai places serve food with that sort of richness - which some might even accuse of being bland. 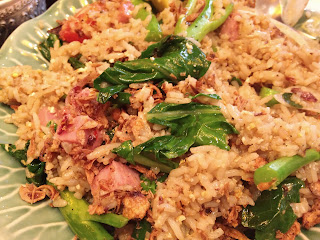 In fact, there're few things more authentic than a dish like Khao Pad Naem (see above) - which is Thai Fried Rice with Pickled Pork (or they call it fermented pork here which sounds just a tad unsavoury). This is one of the few Thai places in Melburne that serves this dish. Their version lacks a kick but the flavours are not bad at all so that even the novice will find the spice level very manageable.

The Service
This is where it all falls flat. This place doesn't have the expected friendly Thai service that one has come to expect. When they serve the food without even looking at you, it starts to grate badly. When it gets crowded, the pressure really gets to them and their service becomes very brusque, hurried and definitely non-personable. Also, they have trouble keeping track of who's sitting where so that when you want to pay the bill - it, usually takes longer than necessary. Finally, diners in the same group are very unlikely to get their food at the same time. So, unlinke most Thai restaurants where service leaves little to complain about, this place really doesn't seem to put in much of an effort - but with a location like this and the continued crowd, I am not sure they care.

Overall
I would go there when it is less busy to try a range of different dishes, and perhaps when they are under less pressure.

Cultural Moment
As they say on the menu, Ghin Khao literally translates to "Eat Rice" - a call to let others know it's meal time. In most Asian cultures, meal times are still family events and the traditional basic rituals are still very much intact. Mostly, it's set around inviting elders to eat, or waiting for them to start, and then inviting peers to eat. The call to eat, therefore, is not unusual and happens in most parts of Asia.

I am not going to write a piece here on dining etiquette - the fact is, it's different in different parts of Asia and maybe I'll do it at some point, but not here. For now, what's important is to remember to 'invite' hosts and elders to partake before you dig in, or even better, to wait for them to be seated and start. However, in some places, it's just as likely that the Host will want you to start and insist on it - go with the flow.
Posted by Shanton at 20:05