This is a new set up as of June 2013 and is a place you have to queue to get in for dinner. Surprisingly, with the crowd, it has a relatively low score on Urbanspoon and there are some really harsh comments from diners with one review. It proudly says that this is a concept by David Loh (of Food Republik fame in Box Hill, and Dessert Story), a quite renowned chef of Malaysian origin, who is also inspired by Taiwanese and Hong Kong cuisine. This is one of the few times I have to disagree with Urbanspooners - I had a good experience here at Shophouse Kitchen and look forward to coming back again when it is less crowded. I think a lot of the bad reviews were from the initial teething problems to do with service and food preparation timing. They seem to have improved since June. 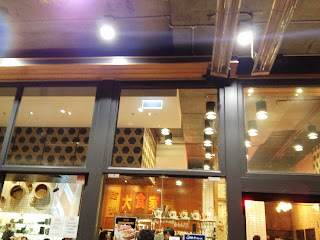 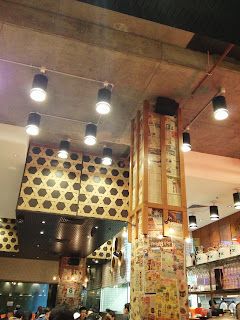 This is a tastefully decorated, that befits the kinds of eateries in the area. There are lots of things to look at inside, including the upside down fortune sign (in neon lights). There is a definite buzz here and the crowd dines amenably in a rather tight space. As things settle down, I hope this place will become a more leisurely dining space rather than the current somewhat hurried feel.

It is however, a very well ventilated and insulated place. There is no smokiness and the sound level is just a buzz. You can actually hear each other without needing to shout at your friends. This is very well set up.

It's not exactly kid friendly because of the tight squeeze (but that shouldn't be over stated - there are worst places). Parking is probably easiest under QV itself.

Things to do Nearby: This is set within the QV Compound.

The Food
I believe they do use a bit of MSG and I hope I am proven wrong and they stop using this very quickly. I think it was just in the minced meat sauce in my noodles. Beyond that, there were some really good dishes. Firstly the noodles quality was excellent. We tried the Minced Meat and BBQ Pork Noodles, Braised Pork Belly Noodles, and the Crispy Wonton and Crispy Pork Noodles (all pictured in succession below). Suffice to say they were all very tasty. What I think is important to highlight is that they didn't feel too salty unlike some places that serve similar dishes (the exception was the minced meat sauce which was salty). The other meats didn't have a high level of salt which makes for a very pleasant change. 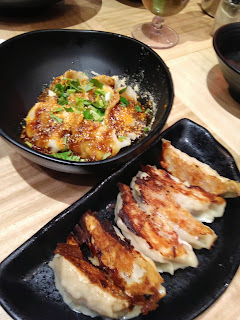 We also had some of the Panfried Chicken and Shitake Mushroom Dumpling which was really succulent and tasty, with a thinner than average dumpling skin. Then, there was the Wontons in Chilli Oil and Black Vinegar, which I felt was less stellar. Although, it had 2 little chilli symbols on the menu, the wontons were not very hot. As regular readers of my blog might know, I when I am promised vinegar and sour things, I like it to be really sour - the wontons had a more peanut sauce taste than vinegar. In hindsight, I should have added the readily available black vinegar. (Pictured right, wontons on top and dumplings below.)

Finally, when I say that Hot and Sour Soup  (pictured below) was on the menu, I had to try it. I try this item whenever it is available at a restaurant. I have to say that it was not bad. Firstly, it wasn't sweet which was really good, it had no hint of tomatoes, which is even better. There was some szechuan pepper corn in it, some chilli oil and definitely black vinegar. You can add vinegar to taste too if it's not sour enough. It had shredded chicken too. The tofu they use was not of the silken variety but just your basic tofu (which was not ideal for me). Like I said before, it was ok but not necessarily the best. 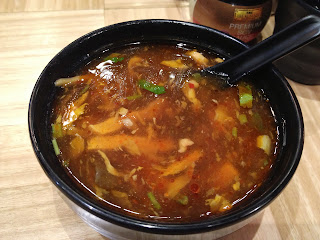 The crispy noodles was pretty yummy but you have to eat it quickly because once it gets to room temperature, it's not great and maybe there's just too much of it. You have to like shitake mushroom and abalone sauce for this dish.
The Service 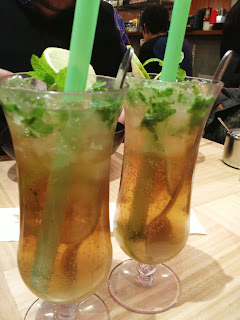 To begin with, queue management is everything when you have a new place like this. It kicks off people's impression and sets the tone for their attitude. Depending on the waitstaff looking after the queues, there are some hits and misses here. I didn't experience too many problems here and it was relatively well managed despite the cold. However, it is important that all staff who are managing the queue are able to interact with queuing customers, keep them informed or even have a discussion with them about items on the menu while they are waiting.

Once you get in, they seem to be well staffed so that you are served pretty quickly, and if you are not, just raise your hand and smile for a bit of attention. The food comes when it comes depending on what you order. So, start eating instead of waiting, it's that kind of place. Mostly, they are friendly and efficient if not very personable.

Overall
I will be coming to this place again, and again - there are too many dishes I want to try.

Cultural Moment
It's really a pleasure to see that all Shophouse Kitchen's menus that are in English have accurate descriptions and no spelling error. This is going to be a bit of a rant and is going to sound very politically incorrect but I am going to say it anyway... what is it with places that can't get their menus right - with wrong spelling, wrong descriptions and wrong contextualisations. I have seen so many Asian restaurants like this. Even the signages are embarrassingly wrong in many places.

I can completely understand this in a country where English is not the first language - completely understandable and acceptable. I don't even expect people to have perfect English here in Australia - I certainly don't - you just have to read my blog to know that. Even Aussies don't have perfect English. However, when producing a menu or a signage, SURELY a restauranteur would check with someone that they have the terms right - and that there are no embarrassing mistakes? SURELY, it's easy enough to get the people who produce the big signages to do a quick check? SURELY they have at least one random English speaker who might be able to suggest that glaring mistakes be avoided. However, this is clearly not the case.

I am going to offer my humble services - if you are an Asian restaurant owner and need someone to check your menus and signages - holler at me, and if I am available, I'd be more than happy to help out. How about that? So anyway, that's my rant done... don't throw shoes at me!
Posted by Shanton at 05:40