This is possibly going to be my shortest entry so far in more than 6 months of blogging. It's a simple eatery with a fresh feel. It is a great addition to the area as a no fuss, friendly, and informal space, that serves fresh Japanese takeaway food.

The Place
This is a little place along Smith Street, next to the pub and well positioned in front of the tram stop. It is clean and feels a bit trendy because of the simple deco they have used. It doesn't feel like a tired old grotty takeaway (partly because it's new but also because of its set up).

Things to do Nearby: Smith Street shops or a 10 minute walk to Brunswick Street along Johnston Street (the section with all the furniture and new home living shops) 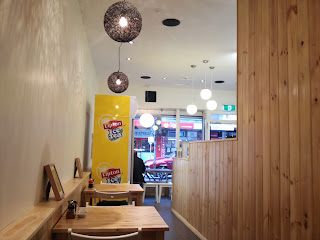 The Food
The food is fresh made sushi, done by Japanese chefs... I was so excited that I didn't take any photos. They had the usual rolls and my favourite was the plain and simple Inari (rice in beancurd skin), which was not overfilled with rice, and tasted like they do in Japan. It's hard to go wrong with Inari (which actually means rice in Japanese) but some places do serve it up really dried our. That's not the case here.
They also have a small range of cooked meals - donburi style. I had the Katsu Don (Fried Crumbed Pork on Rice) which was basic but nice is served with teriyaki sauce. It looks and tasted similar to some of the quick meals I had while in Japan where it was basically the katsu and don - and a bit of ginger and spring onion - nothing else. So, don't come here expecting fancy Japanese, but a quick meal/snack and you won't be disappointed.

The Service
They are friendly here and it's really functional service. They do not feel the need to shout out greetings at you like many other Japanese places in town but still come across as really easy going and polite. All good and informal.

Overall
This is going to be a great place for a quick lunch (in or takeaway) and a no fuss quick takeaway meal on the way home from work, or just a snack in the middle of the day.

Cultural Moment
The humble Katsu Don comes in different forms in Japan. As my brother said when he came back from a trip to Japan, he had "Katsu Everything" - highlighting that it's a highly popular dish in Japan. There's Katsu Sandwich, Katsu on it's own with Salad, Katsu with Ramen and of course, Katsu Don.

Katsu Don itself is basically the crumbed pork cutlet served on rice. However, variations include being served with worcestershire sauce, miso sauce, shoyu (soy) sauce, or with a wet egg omelette over the katsu plus any combination of sauces. You could event find places where they substitute the pork for chicken or beef. So, the long and short of it is, you could potentially have katsu don 5 days of the week and never have the same meal twice. Yummy fried goodness... but of course, everything in moderation, right?