Yumcha in Prahran in quite a prominent location should do well but there would likely be high expectations here. The challenge is that such a restaurant would have to balance perceived sophistication and quality with affordability. For a place on Chapel Street that has been opened since 2010, it has an unusually low number of raters on Urbanspoon. Strategically, I think that while things are going ok in terms of the venue, location, food and service - these things are not necessarily coming together. I mean, I am not an expert in running restaurants but I am a diner. I think that the "All You Can Eat" big poster approach is a strategic error for this restaurant because it just makes people question the quality of the food here on Chapel Street. If they marketed it as a Yumcha banquet with a better looking menu, the perception might be a bit different and they might even attract more of a lunch crowd for meetings - to complement the dinner crowd. With HuTong in Commercial Road having a lower rating than the Market Lane branch - this is an opportunity for Good Luck Tea House which they don't seem to be taking advantage of. 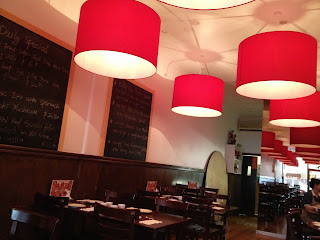 This is a good generous space which doesn't squeeze diners together. It is also a clean restaurant, tastefully decorated and they have a relatively nice layout overall. It is is permanently on mood lighting, and is quite different from Chinese places with fluorescent lights.

It is relatively child friendly and parking should be ok across the road behind Coles.

Things to do Nearby: This is near the junction of Chapel and Commercial Roads and so, you have all the shops nearby.

The Food
The food is actually not bad at all. The yumcha offerings are pretty decent for an "All You Can Eat" place. I have only had the yumcha here and my verdict is that it's not bad. $19.90 for yumcha is really cheap these days and if you are there with a small bunch of friends, you can try nearly all the 35 dimsums on offer.

The highlight for me was the Chicken Feet (Fung Chao - pictured below), lightly spiced, and braised in black bean. It was really tasty... and I had all four to myself - so HAPPY. 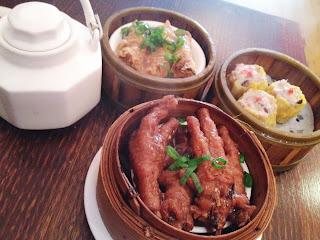 ﻿
Other highlights for me included:
Beancurd Roll (also pictured above, next to the teapot) which was braised and was really yummy when eaten hot and steamy.

Salted and Spicy Squid Tentacles (pictured below) which has a light batter, not overpowered by garlic, salt and pepper and very fresh... others in Urbanspoon have criticised this before, but I found mine most succulent, fresh and tasty. 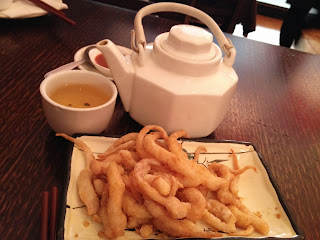 The Service
They have what I call unobtrusive polite service. Not overly friendly and chatty but it gets the job done with basic efficient delivery of food.

Overall
It's not bad overall and presents a nice alternative to dining choices on Chapel Street. I just think that it's the "All You Can Eat" sign that's putting people off. But the quality is actually there.

Cultural Moment
Warning: Self Plagiarism Ahead.
Since this post is about the various dimsums ... I thought I'd re-introduce an extensive piece I wrote previously on the different dumplings on offer. If you are an avid yumcha enthusiast, it's worth knowing what you are having. So, here it is again;

Dimsum is a Cantonese word that indicates the variety of small dishes served at Yumcha (drinking tea) session. Therefore, the greatest Yumcha experiences are of Cantonese origins.Here's a limited range of dimsums you will commonly find in Melbourne (each will contain the Cantonese name / Mandarin Name / English Description);

Siu Mai / Shao Mai / Pork Dumpling - is the most common dim sum, which has evolved in Australia into your dimsim (dimmy) in your fish and chip shops. This is a common brekkie dimsum throughout southeast China, Singapore and Hong Kong. Both Robbie and I love this LOTS.

Har Gao / Shia Jiao / Prawn Dumpling - is just that, prawns wrapped in pleated translucent flour based skin, that should not stick to each other when you try to pick one up.

Yee Chee Gao / Yu Chi Jiao / Shark Fin Dumpling - is not Shark's Fin Dumpling. It does not contain shark's fin and is so named because it is shaped like a shark fin. That's all - and it is basically and pork and seafood dumpling.

Char Siew Bao / Cha Shao Bao / Steamed Pork Bun - Bao (refers to the particular style of bun) and is a staple in most places. Filled with steaming barbequed pork (Char Siew), the bun should be light and fluffy (watch out for the piece of paper at the bottom). My friend, Deb loves this.

Fung Chao / Feng Jiao / Phoenic Claws (Chicken Feet) - is what it is. Different places might serve it a bit differently from black bean based to spicy sauce. You either like it or you don't. I like it and I believe my friend Jeremy likes it too!

Chee Cheong Fun / Zhu Chang Fen / Rice Noodles - needs a bit of explanation. A literal translation of Chee Cheong Fun is Pig Intestine Noodles. Don't be alarmed, it's not made from any part of a pig. It just looks like a pig's small instestines, hence, the name. With these rice noodles, a coffee shop might sell it with just the noodles, some chives, sesame seeds and a sweet soy sauce. However, most yumcha places will serve a variety, with Char Siew (called Char Siew Cheong), Prawns (Har Cheong), Fried Dough (Cha Leong which translates to fried double, with the fried dough and the noodles making the double). Ev and Nathan do like these :)

Pei Tan (Shao Yuk) Chok / Pi Daan (Shao Rou) Zhou / Century Egg (Roast Pork) Congee - most yum cha places, one would just ask for congee and this would be the variety served (some places with, and others without the roast pork in the congee). What is century egg? It's preseved egg (that's black in colour and a yellowish gray yolk). I have to have this at every yum cha and the other person I know who loves this is Caroline.

Tan Taht / Dan Ta / Egg Custard Tart - When I was young, I used to think that Tan/Dan means Egg and Taht/Ta was just Tart. I recently found the chinese character for Taht/Ta and it actually means 'Flog' - presuming referring to the flogging to the egg into a custard. I have never been a fan though it is one of the most popular dishes. Deb LOVES this.
Posted by Shanton at 22:31